“Care for the habitat of the Blue-billed Curassow”

Every year ProAves holds the Paujil Festival in order to teach kids and adults about the Blue-billed Curassow (Crax alberti), a bird endemic to Colombia and Critically Endangered.

This festival is a dynamic and educational event where different activities are developed directed at the community, especially children and young people who are closest to the area surrounding the El Paujil Bird Reserve, where ProAves focuses its efforts on the conservation of this bird.

During the festival different activities such as workshops and talks on the Paujil and the mural of the VI Festival of Paujil was painted in the Educational Institution Puerto Pinzón, with ninth grade students and accompanying teachers and representatives from ProAves.

With the participation of more than 180 children, youths and adults, of the same school, a fashion show was held under the theme “Care for the habitat of the Blue-billed Curassow” it was conducted through the streets of Puerto Pinzón carrying a message to the community of conservation and care of Blue-billed Curassow and its habitat. Also, with the assistance of more than 400 people, a parade was carried out in which ProAves participated in the carnival with myths, legends, the Blue-billed Curassow and migratory birds, where children walked the streets of the town disguised as Blue-billed Curassow, migratory birds and characters from different myths and tales of the region like the weeping lady, the mother mountain, the demon, the devil, and mohan the bearded one.

The observation race was established as a fun and educational activity, attended by 66 people mostly children and youths, each team was assigned names of birds and endangered species of the region and participated in tests such as a bird painting, going through the swamp, help the Blue-billed Curassow and migratory birds, among others.

These samples are set in a cultural and educational source of environmental and cultural recognition.

On the 26th of October, as a symbolic act, the lantern parade took place through the main streets of Puerto Pinzón, where more than 300 people, including children, youths and adults took part. These lanterns were made by children with different motifs, including the Blue-billed Curassow and migratory birds. 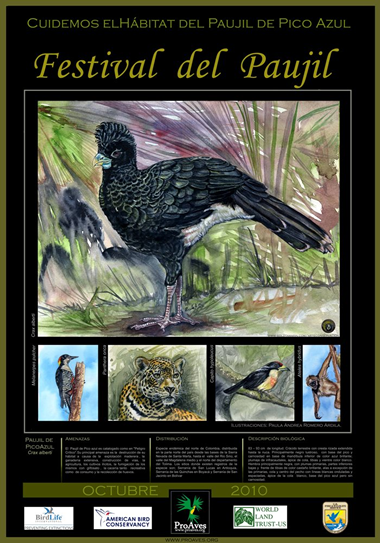 Poster that is part of the diffusion, is a work of art made by artists and plastic illustrators Paula Laverde and Fernando Romero of the Arts and Conservation Foundation.

Thanks to the following organizations for their support in carrying out the Festival.