15 years dedicated to the conservation of Colombian birds and biodiversity 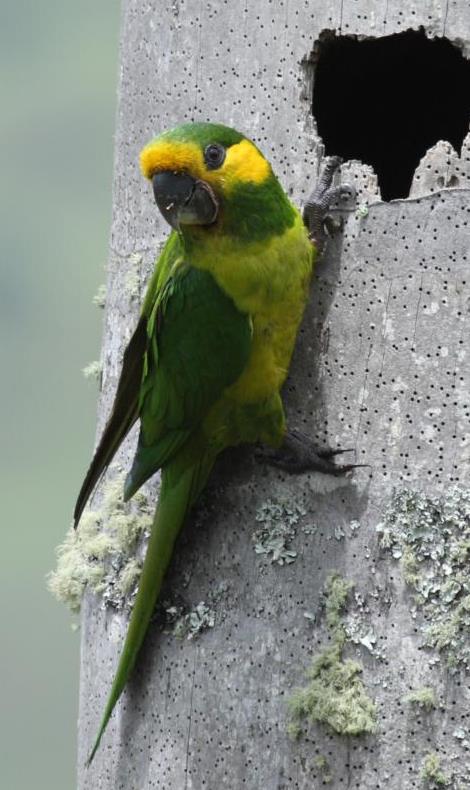 15 years after initiating a series of actions to preserve the Yellow-eared Parrot, we are proud to have a strong team of more than 75 people. We protect 23 nature reserves in perpetuity, which hold 15% of the world’s bird species and 85% of all birds recorded for Colombia. More than 14,000 children participate in the ecological “friends of the birds” groups.. The development of a large number of educational and research initiatives position us as one of the stongest and most important conservation organizations in Colombia.

Fieldwork began in 1998 with the goal of locating a species  that was believed extinct, the Yellow-eared Parrot (Ognorhynchus icterotis). After 11 months of fieldwork, the search for the Yellow-eared Parrot  in the few remnants of wax palm in the Colombian Andes paid off. Alonso Quevedo, now ProAves Executive Director, was part of the team which recorded the species.

At that time 81 individuals  were discovered. In 2010, thanks to ProAves’s conservation actions, supported by  Loro Parque Fundación, the International Union for Conservation of Nature (IUCN) downgraded  the species from the Critically Endangered (CR) to the Endangered (EN) threat category. Today we have a population of more than 2,000

During these 15 years we have established 23 private  nature reserves, two dedicated to the protection of amphibians, the Ranita Terribilis Reserve (Phyllobates terribilis) and Ranitas Andinas Reserve (Ranitomeya tolimensis y R. Dorisswainsonae), one for protection of the Cotton-top Tamarin (Saguinus oedipus), and another for the protection of the Jaguar (Panthera onca). With their establishment, we protect about 86.500 acres in the most endangered places in our country.

Additionally, fulfilling our mission, we have developed activities and strategies to restore and enhance habitat for bird species in Colombia, for this, we have established 10 nurseries located in different regions with different types of forests, in which we have managed to produce close to 980,000 native seedlings. We have reforested more than 4.500 acres with native species under some kind of threat category.

Additionally, we are pioneers in the implementation of effective strategies such as Conservation Easements. To date 24 easements have been established that protect 3,000 acres of forest in three areas of the country (Santander, Antioquia and Tolima).

Reciprocal Agreements for Water (ARA’s) are a tool that is being developed in 3 locations in the country and aims to preserve approximately 5.200 acres of paramo and forest that protect water sources and habitat for threatened and endemic birds of Colombia.

Our successful Artificial Nest Program has provided more than 400 nests for endangered parrot species in Colombia, allowing the documentation of non-existent information on the reproductive biology of the species, as well as providing guidelines for the formulation of conservation strategies directed at the protection of habitats and species.

Since 2005, ProAves has been working on the design and establishment of conservation corridors in order to contribute to ensuring the viability of biodiversity in different areas of the country. With the support of organizations such as Conservación Internacional, American Bird Conservancy, Loro Parque Fundación and Rainforest Trust,  three corridors have been established in different parts of the country in order to promote connectivity and thus the conservation of endangered bird species and other groups of animals found in the region.

The established conservation corridors are:

Andean Parrots Corridor, which is located in the municipalities of Roncesvalles (Tolima) and Genova (Quindio), preserving paramo and high Andean plateau forest ecosystems.

Hand in hand with the Community

Experience has taught us that working with the community is the key to the sustainability of projects. From the beginning of our activities in 1998 including the communities surrounding the reserves has been a priority. In 2013 we celebrated the IX Fuertes’s Parrot Festival the XIII Yellow-eared Parrot Festival and for the first time, the Festival of the Santa Marta Parakeet, the X Festival of Migratory Birds and the XII edition of the Campaign “Reconcile with Nature”.

During these 15 years, we have linked to and made aware over 30,000 Colombians with our programs: Bird Friendly Schools, Ecological Groups, Young Researchers, Parrot Bus, Social Service and Nurseries with the distribution of educational materials in more than 4,000 activities with children and young people across Colombia.

Currently we have the support of 1,410 members who are part of our free and open membership, this mechanism brings us close to Colombians and foreigners who want to share our vision of preventing the extinction of endangered species and to protect their key areas.

Thanks to ongoing work with the community, and with the impulse of various interagency cooperation agreements with municipalities, autonomous corporations, partnerships in NGO’s and city and state agencies, the Yellow-eared Parrot and Fuertes Parrot have been positioned as flagship species, and they are now part of the municipal symbols of Jardín, Antioquia and Génova, Quindío.

Thanks to our research initiatives four species of birds, four amphibians and one lizard species new to science have been discovered as well as the rediscovery of five species of lost birds and four possible new species of amphibians.

Moreover, we conduct the monitoring of over 1,550 bird species protected within our network of reserves, including 70% of endangered species, we have trained 500 students and teachers in ornithology and conservation and we are pioneers in the study and monitoring of migratory birds like the Golden-winged Warbler (Vermivora chrysoptera) and the Cerulean Warbler (Setophaga cerulea) in their wintering  areas.

We have consolidated a program of camera traps in 12 of our reserves that have recorded 40 different species, 80% of the records are of mammals. We obtained records as important as the spectacled bear, (Tremarctos ornatos), in the Reserva Arrierito Antioqueño, over 100 records of the Blue-billed Curassow, (Crax alberti), in the Reserva El Paujil, as well as the registration of large mammals like the Colombian Tapir, (Tapirus terrestris columbianus), and the Jaguar (Panthera onca) in the Colombian Amazon.

Since 2006, we publish the  Conservación Colombiana Magazine twice a year that is already up to issue 19. Each year the edition published in October brings the updated list of birds of Colombia; the 2012 edition reported 1,898 species for Colombia.

By working in partnership with several national and international organisms, public and private, we have established agreements with more than 80 institutions that have believed in us and our mission. We also are founders of international initiatives such as the Alliance for Zero Extinction, Golden Wings Alliance, and Banding Network of the Americas.

Passion and commitment to conservation by the ProAves family is strengthened day by day and the celebration of 15 years of work reaffirms the responsibility we have to care for our land and the unique species that inhabit. For us it is an obligation to promote and support the conservation of the natural heritage of Colombia through specific conservation actions, research and community outreach..