The 7th edition of Conservation Colombiana journal is dedicated to a Management and Conservation Plan for Fuertes’s Parrot , a Critically Endangered species endemic to montane forest in the Central Cordillera of Quindío and Tolima. Thanks to the support of Loro Parque Fundación, American Bird Conservancy and the Corporación Autónoma del Quindío, ProAves researchers Esteban Carrillo and Carlos Andres Páez compiled years of research and conservation on the parrot since its rediscovery by ProAves President Alonso Quevedo in 2002. The conservation plan aims to guide future actions to save the species. 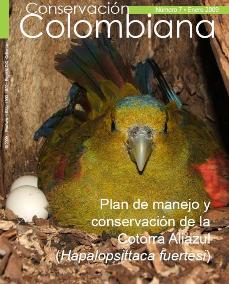 Fuertes’s Parrot is an endemic species to Colombia, currently restricted to a narrow altitudinal range between 2600 and 3500 m on the western side of the Central Cordillera, covering the southern department of Caldas, eastern Risaralda, north-eastern Quindío and western Tolima. The species is known from just three breeding populations and has a global population of approximately 200 individuals.

Fuertes’s Parrot is Critically Endangered due to rapid and continuing deterioration of its natural habitat, because the Andean forest, have been subjected to intensive agriculture practices for many centuries, which has led to 22 species of montane parrots being threatened with extinction.

Extremely range restricted species, such as Fuertes’s Parrot, are highly susceptible to extinction if we fail to preserve its natural habitat. Therefore, the preservation of montane forests is critically in maintaining healthy populations.

To create the Management and Conservation Plan for Fuertes’s Parrot in the Cordillera Central, it was necessary to take into account the different political, legal and environmental aspects of the region and country, in order to strengthen conservation for the species and reduce threats. We hope the strategy will serve as a guide for the prioritization of activities to ensure the conservation of the species.

We are grateful to the tremendous support of Loro Parque Fundación, American Bird Conservancy and NMBCA to continue saving the Fuertes’s parrot and critical montane forest habitat in the Central Cordillera.