During these celebrations, there will be activities that demonstrate the interest of the community in the conservation of the species and their habitats. An interest that is linked to a long process of awareness and environmental education through field activities, games and community involvement, with very important results such as the declaration of these species of parrots as emblems of these municipalities.

Likewise, traditional events will be held such as parades through the main streets of the towns, with people in costumes representing parrots, migratory birds, mammals and other endangered animals of the regions.

Giving a Welcome to Extreme Travelers for 10 years 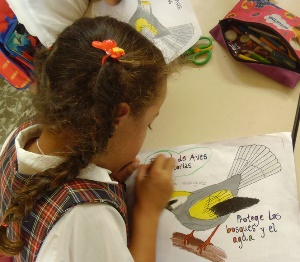 For the last 10 years we have been welcoming these Extreme Travelers each year, who  spend their winter season in our country. It is a party in appreciation of the ecological function that they provide.  Also for the biological control, seed dispersal and beauty with which they delight us.

It is also a festival to raise awareness that these important birds are in danger when they come to our country, for they need balanced ecosystems but they find forests logged, streams built over or contaminated water sources, monoculture, pesticides, high buildings with glass windows and other threats caused by humans.

With the Tenth Migratory Bird Festival the community is expected to focus its actions on transforming its relationship with natural resources, such as those proposed by ProAves  over 15 years of conservation and environmental education, raising awareness in agricultural practices through bird-friendly crops, with organic cacao, hedges, biological corridors, reforestation and protection of water sources.

Festival of Threatened Parrots of Colombia 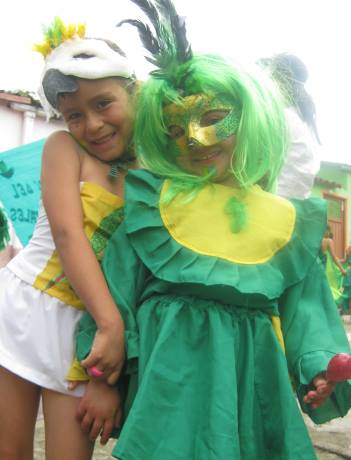 The Fuertes’s Parrot Festival was the first to be held, in 2002, after Alonso Quevedo, now Executive Director of ProAves, rediscovered two species of parrots that were thought extinct, the Yellow-eared Parrot and the Fuertes parrot in the municipalities of Genova, Quindío and Roncesvalles, Tolima.

With the start of urgent conservation actions, such as the establishment of the Nature Reserves – Andean Parrots, Fuertes Parrot and El Mirador (leased from the town council of Genova), the need was felt to raise awareness of the ecological importance of these species to the community and the Threatened Parrots Festival was born.

Next year the Yellow-eared Parrot Festival will be held in Roncesvalles, which since its inception, has involved the entire community around this species that only had 80 individuals. Thanks to these actions of environmental goodwill and cultural tradition, today there are 1640 individuals flying over the Andean mountains. This parrot has become the ProAves’ symbol up to today, a logo that represents 15 years of dedication and perseverance.

Replicating this rewarding experience, the Yellow-eared Parrot Festival and Wax Palm Festival, has been held since 2009 in Jardín, Antioquia. This town also has a significant population of the species, declaring it as the emblem of the town and placing it in its coat of arms.

Striving to follow these conservation processes for the most endangered parrots of Colombia, the Festival of Santa Marta Parakeet will be held for the first time in the village of Minca, Sierra Nevada de Santa Marta. These parrots are in a dangerous state because of illegal trafficing and the disappearance of their habitat due to logging and illegal crops.

Such festivals have highlighted the process of years, with the community, bird friendly schools and ecological groups, parades and activities, full of goodwill, knowledge and leadership to prevent the extinction of these parrots.

Other activities to be held at these locations are environmental talks, radio programs, movie forums, art exhibitions, community meetings, games, and visits to natural bird reserves among others.