ProAves and El Grupo Cerúleo have partnered with American Bird Conservancy to develop and published the Conservation Plan for the Cerulean Warbler on its Non-breeding Range in the journal Conservación Colombiana.

This comprehensive action plan details the current knowledge of the species to produce a blueprint that addresses the challenging issues involved in collaborative conservation of a species whose range spans many geographic and political boundaries.

“This wonderful partnership will ultimately lead to more effective conservation efforts for a bird in real trouble. ABC and Fundación ProAves already have multiple projects underway that will benefit the Cerulean Warbler, and this new Conservation Plan will accelerate and guide these important efforts,” said George Fenwick, President of ABC.

One innovative project initiated by ABC and its partner Fundación ProAves has been the establishment of a pilot project in Colombia to demonstrate the potential for shade coffee and cacao plantings to provide habitat for Cerulean Warblers. The project works with private land owners and encourages them to maintain their lands as habitat for the warblers and other migrant and native species. The Conservation Plan for the Cerulean Warbler on its Non-breeding Range indicates many opportunities for similar conservation actions that can carried out for the conservation of the species. 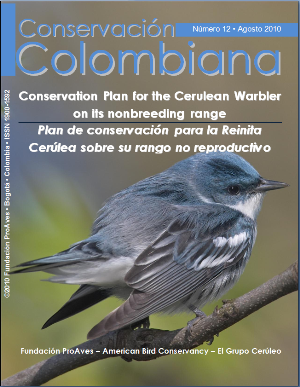 “We hope that, by identifying the threats to this bird and implementing mitigation strategies, we can help save one of the most spectacular migratory birds in the Americas,” said David Caro, Executive Director of Fundación. “This plan will not only assist and guide efforts by individuals, institutions and groups on behalf of the Cerulean Warbler, it will also benefit many other resident and migratory birds.”.

The Cerulean Warbler population is one fifth of what it was 40 years ago. It is our fastest declining neotropical migrant songbird and is one of the most threatened migratory birds in the Americas and considered Vulnerable under IUCN-World Conservation Union criteria. The species nests in deciduous forests in North America and inhabits montane forests and associated agroforestry systems in northern South America during non-breeding seasons. Few studies have been undertaken on the Cerulean Warbler’s non-breeding grounds, but there have been significant recent advances in the knowledge about the species’ geographical distribution, survival, and ecology, supported in part by ABC, the Neotropical Migratory Bird Conservation Act of USFWS, the National Fish and Wildlife Foundation, the USDA Forest Service, and others.

The Cerulean’s population decline has been attributed to habitat loss and fragmentation across its entire geographical range. The clearing of forests for agriculture and cattle pasture and conversion of traditional shade-grown coffee plantations to sun coffee plantations are among the main threats in the non-breeding range.

The main goals of the partners are to use diverse economic and ecological tools such as certification and economic incentives to reduce the loss of shade-grown coffee farms, to promote a protected areas network using the warbler as an umbrella species, and to restore and enhance habitats.

American Bird Conservancy (www.abcbirds.org) conserves native birds and their habitats throughout the Americas by safeguarding the rarest species, conserving and restoring habitats, and reducing threats while building capacity of the bird conservation movement. ABC is a 501(c)(3) not-for-profit membership organization that is consistently awarded a top, four-star rating by the independent group, Charity Navigator.

ProAves (www.proaves.org) protects wild birds and their habitats in Colombia through investigation, directed conservation actions in collaboration with local communities.

El Grupo Cerúleo (www.grupoceruleo.org) is an international group of scientists dedicated to the study and conservation of the Cerulean Warbler.