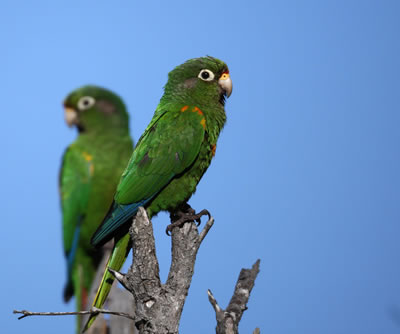 The El Dorado Bird Reserve was created on March 31, 2006, based on the urgency of conserving one of the most fragile and important zones in Colombia, the Sierra Nevada de Santa Marta, home to a large number of unique plant and animal species.

The reserve is located on the Cuchilla de San Lorenzo, in the western sector of the northern slope of the Sierra Nevada de Santa Marta, in the village of Minca, in the municipality of Santa Marta, Magdalena department. It currently covers an area of 1.976 acres, in an altitudinal range between 900 and 2600 meters.

It has a high number of endemic species of fauna and flora which are threatened with extinction, as well as preserved forests which benefit the three species of birds most threatened of the Sierra Nevada de Santa Marta: the Santa Marta Parakeet (Pyrrhura viridicata), the Santa Marta Bush-tyrant (Myiotheretes pernix) and Santa Marta Sabrewing (Campylopterus phainopeplus). For these values the reserve is designated as a Site AZE and an important area for bird conservation – IBA.This reserve is part of Chunduas District of biogeographic provinces of the Sierra Nevada de Santa Marta and an Endemic Bird Area (EBA 036). This site also protects important areas for more than 40 species of migratory birds like the Golden-Winged Warbler (Vermivora chrysoptera) and Cerulean Warbler (Dendroica cerulea).

The area that makes up the reserve is composed of native forests previously owned by the Haciendas La Victoria, Cincinnati and Vistanieves, coffee trajectory and a history of more than 100 years in the region.

Hydrography:  The northern sector of the reserve is located on the river basin Gaira which is of vital importance to the city of Santa Marta, numerous third and fourth grade streams which are very important to smaller communities such as townships and villages, run through the area. In the south of the current protected area, the streams discharge mainly into the river Toribio.

Climate: The reserve has a bimodal climate with temperatures averaging 18 º C. In general, it has a dry season from December to April and a rainy season from May to November, with a slight decrease in rainfall during the months from June to July (late summer, so called San Juan (Indian summer)).

Ecosystem: the reserve protects subtropical forests (mist) of the sub-Andean and Andean bands sub-Andean forests are found mainly between 1000-2300m elevation and the Andes over 2300m.

Vegetation: The reserve is made up of different successional forests and mostly intact forests. The vegetation is typical of subtropical rainforest at the bottom, towards the Gaira River Basin, dominated by species of Ficus, Guarea, Poulsenia, Myrsine, and Vismia. Licania Trichospermum and in the wooded, sub-Andean forests with trees characteristic of Ficus spp., Chrysophyllum sp, Sloanea sp., and high number of epiphytes, towards the middle, and vegetation typical of edges in the upper levels represented by Andean elements such as Paragynoxys, Escallonia, Hesperomeles, Ceroxylon and Brunellia. From 2300 m elevation and up the abundance and dominance of bamboo Chusquea scandens is remarkable.

We find species of conservational importance in other biological groups like the San Lorenzo Salvia (Salvia libanensis), the Umbrella Plant (Gunnera Tayrona) and native pines Podocarpus oleifolius and Prumnopitys montana; among mammals the Night Monkey (Aotus griseimembra) and the Puma (Puma concolor) and 14 species of frogs endemic to the Sierra Nevada de Santa Marta among which two species of the genus Atelopus, Colostethus ruthveni and Cryptobatrachus boulengeri are of note.

Facilities: There is accommodation for 28 people, in modern and comfortable cabins with electricity, running water and cell phone signal.

Attractions: Views of natural beauty: snow-capped peaks can be seen, the Cienaga Grande de Santa Marta and Toribio River Valley from the Mirador and the Observation Tower. The Reserve has 6 trails of varying difficulty and various types of habitat, totaling more than 5 km long, on which you can hike and do bird watching.