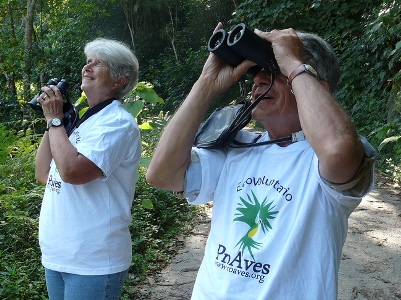 Although Colombia is the largest number of bird species in the world (about 1879), counts of birds are a relatively new activity. For this reason in 2001 the regional ornithological associations Colombia, the National Birding and Alexander von Humboldt Institute, established the National Census of Birds to increase interest, knowledge and conservation of birds in our country. Currently there are two annual national surveys: the Christmas Bird Counts and Waterfowl Census.

What are Christmas Bird Counts?

Christmas Bird Counts is an initiative that seeks to generate information to determine the current status, changes may have on bird populations over time in specific locations in addition to strengthening the knowledge and the generation of appropriate tools for management and conservation birdlife.

How and where are born the Christmas Bird Counts?

Just over 100 years in the U.S. was a tradition during the Christmas season that was to hunt as many birds as possible. Concerned about the disappearance and conservation of many of these species, in 1900 the ornithologist Frank Chapman suggested going out to count birds rather than hunt them. From this year, these counts have been conducted continuously in this region of the world and spread to Central and South America having already more than 60 000 participants annually observers.

For several years in Colombia these counts were conducted by regional organizations like the Association ornithological Ornithological Bogota Ornithological Foundation and the Atlantic. Currently, these counts are included in the annual national census of birds, which has enabled its establishment over 10 sampling points throughout the country, from the island of San Andrés to the department of Nariño.

When do these counts?

The counts are traditionally held every year during the last days of December and early January. In Colombia the dates for the completion of this count is between 14 December and 5 January.

How are the Christmas Bird Counts?

The methodology is quite simple in that each association, organization or person wishing to make a count shall:

• Choose your region in a circle of 25 km in diameter with the center of it properly georeferenced (geographical coordinates).

• Include in the circle several natural and man-made habitats that are easily accessible (ie forests, wetlands, bamboo forest, urban and suburban areas, etc.).

• Form groups of no more than five people to visit at least one of the proposed habitat within the circle and having a focal point to gather information.

• Perform the count at a period not exceeding 24 hours.

• Identify and count all birds seen and heard, and the number of individuals observed.

• Note the number of hours of counting, ie the start and end of activity, distance and means of transport.

• Meet at the end of the day with different teams, compiling all the information collected and turned in to the circle so that he in turn sent it to the national coordinator.

• You can include night-time observations or troughs in the final list of species, but the treatment of number of individuals and other data should be performed separately.

Who can participate in the Christmas Bird Count?

Are invited to attend as observers, bird lovers in the country (associations, organizations, regional ornithological groups, civil society) and generally anyone who is interested in the study and conservation of the environment in Colombia.

How can you participate in the Christmas Bird Count?

Going to the nearest bird association or by directly contacting the event coordinators to address censosnacionales@rnoa.org who will be willing to answer questions and facilitate their participation in the event. This year censuses are conducted by the National Birding and ProAves.