Since August 2013 we have recorded the daily visit of two female and a male Blue-Billed Curassow (Crax alberti) in the vicinity of the cabin on The El Paujil Reserve. Since January the couple alternate foraging for food, which may mean a possible nesting, at the same time the second female also makes sporadic approaches.

The Blue-billed Curassow (Crax alberti) is considered one of the most endangered species on the continent, mainly due to habitat destruction, fragmentation of the forests where it lives and the hunting for human consumption.

Until now Curassow observations were very sporadic, random and of few individuals. Thanks to the creation of the Natural Bird Reserve El Paujil in 2003, a substantial recovery in vegetation cover and population density of the species has been made. 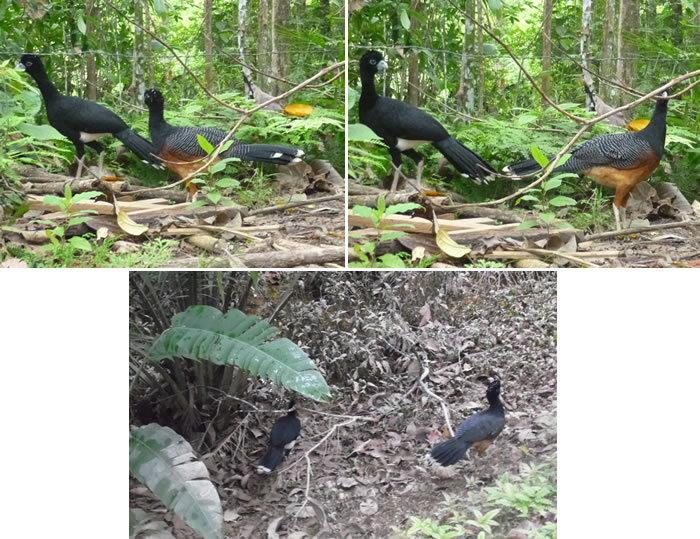 From the very same year of its creation the Reserve records have been kept of the species by camera traps installed in the Reserve, but only today, and thanks to the recovery of its habitat, it is possible to see directly and easily this elusive species.

The importance of the reserve as a safe haven for biodiversity has been confirmed with additional observations, on their properties, with camera traps, such important species as the Puma (Puma concolor) Spectacled Bear (Tremarctos ornatus) and one of the largest and least known of South American mammals, the Critically Endangered Colombian Tapir (Tapirus terrestris columbianus).

The ProAves foundation by running campaigns for environmental education and conservation as the main tool for the protection of threatened species and their habitats, has generated several conservation strategies complemented with research to protect the Blue-billed Curassow, it also has directly involved the community concerned in different areas where there are populations that, after more than 10 years of uninterrupted work, have achieved these concrete results.