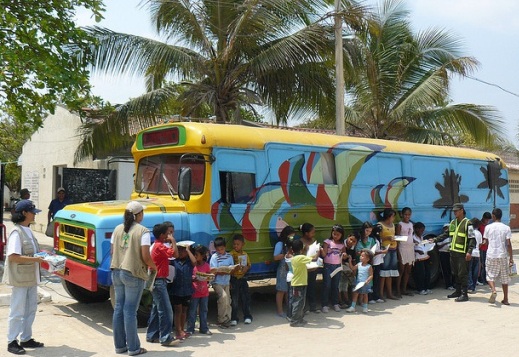 The parrot bus acts as a mobile environmental education classroom. Since 2005, Parrot Bus has been used as environmental educational tool driving all over the country developing fun activities with kids, youngsters and adults, carrying out the message of conservation and care of nature to more than 70,000 people in 145 cities of 16 provinces all over the country. Since this initiative was created, it has visited 2.392 educational institutions and it has driven more than 80,000 km of Colombia.

Trough talks, workshops, games and videos performed inside the bus, ProAves is trying to involve all visited communities, teaching them respect for biodiversity, especially to birds.

The intention of the methodology used within the Parrot Bus is to teach knowledge trough fun activities. Thanks to the projection of documentaries and videos about ecosystems, fauna and flora of Colombia, all participants can learn about it, in the company of Oto Rico, the traveling pet on board of the Parrot Bus.

Finally, and as a accompaniment to the activities carried out on board of the Parrot Bus, board games are organized within the participants, such as stairs of migratory birds (a variant of the board game snakes and stairs), wild birds lottery, endangered parrots dominó, among others. At the end of the activities, didactic material is delivered. This material is mostly composed by bird cards, mini-guides, stickers, pins, posters and t-shirts. 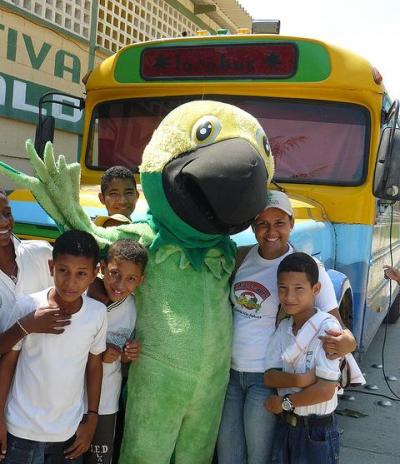 Fundación ProAves has established several itineraries for the Parrot Bus, known as ecological routes. The objective of these routes is to reach a higher number of populations in Colombia, having as priority the visit of locations where there are more endangered species.

On April 13, 2009, at the opening meeting of the EU Environmental Ministers in Prague, Czech Republic, ProAves was awarded the national prize by the Energy Globe World Awards for ProAves Parrot Bus initiative. Over 769 projects participated from 111 nations.

Three new municipalities of Colombia were visited by ProAves’ Parrot Bus in February, with over 1,000 participants educated. To date the Parrot Bus has visited 148 municipalities reaching more than 73,000 children who learned about the need to protect birds and biodiversity.

During August 2007 – May 2008, the results of the project Driving Conservation, with the support of Disney Wildlife Conservation Fund, show how the project successfully reached 25.413 people from beginning to end.

It is all to common place to see children carrying slingshots with the sole purpose of hunting birds. ProAves launched a campain against hunting birds across Colombia and delighted when over 330 children voluntariary handed slingshots and traps to ProAves staff.

After many trips conducted by the Parrot Bus in different regions of Colombia, ProAves have launched a new amnesty campaign to request children to hand in their slingshot and other objects use to attempt against birds.

Our mobile environmental classroom has been renewed with beautiful inner panels about the diverse and threatened ecosystems of Colombia and its representative fauna and flora.