Protection of watersheds and endangered species

The draft agreement for the creation of the protection and conservation of watersheds and endangered species is formulated by the Municipal Government of Roncesvalles, the public utility services of Roncesvalles (ESPRON) and ProAves under the project of the Pride Campaign and Reciprocal Water Agreements and funded by RARE Conservation.

This is the first municipal agreement in Roncesvalles that has been created for the conservation of watersheds and micro watersheds that supply the town and several villages. Through this agreement, the benefit of users are thought about as well as flat areas of the department’s plan, as is the case of El Espinal, direct beneficiaries of water services from the Cucuana River to irrigate rice, cotton and sorghum the which are the productive base of the town.

With the creation of this agreement, the municipality now has a committee and a water fund which will support the establishment of Reciprocal Water Agreements (ARBs), or any other agreement or maintenance contract involving the owners of the forests and moors of the municipality. 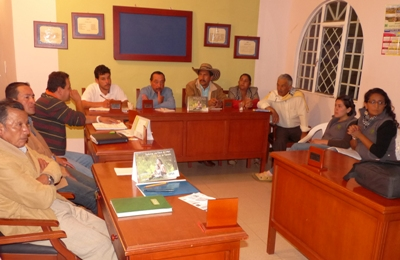 Similarly, it was possible to create a voluntary fee which will be charged on the water bill from July, in order to link users with a contribution to the protection of these areas. The municipality also joined to contribute to the fund and so a group of actors have decided to support its establishment which will be conducted by a committee integrated by the community of Roncesvalles, which will allow long-term incentives for landowners to preserve the moors, forests and endangered species found in the area which, for our case, is the Yellow-eared Parrot.

Coming soon will be a committee which will administer the donated resources and sign contracts with the owners, defining and approving the incentives which will be given, thus, the first signatories of the Reciprocal Water Agreements (ARBs) will be available for early August this year. We thank all the people and institutions who have joined actively in the conservation of natural resources and environmental services.