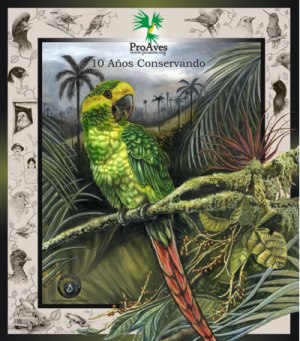 At the beginning of the XXth century this magnificent species with a long greenish-yellow tail was found in great herds in the High Colombian Andes and in the north of Ecuador. However, in 1980 the number of these birds experienced a sharp drop and by the beginning of the 90’s the big herds began to disappear at an alarming speed. In the middle of the 90’s this species disappeared mysteriously and only 50 surviving individuals were left.

As a response to the increasing gravity of the situation of this species, Niels Krabbe launched a preservation project in 1996 for the last remaining herd that at that time was found in Ecuador. The project was a very successful one and it managed to locate the herd in the northeast part of Ecuador. An action plan with many activities was carried out.

In October 1997 Doctor Paul Salaman observed a herd of 24 individuals in the central mountain range of Colombia. At the beginning of 1998 Salaman and Krabbe started the Ognorhynchus Project with the support of numerous organizations. This project was an emergency answer to study and to protect this species in Colombia. The fieldwork started in June 1998 with the aim of locating the species so as to be able to identify the threats and the strategy of preservation to follow in this case.

The team searched and used posters to focus in the geographical historic area were the species had been traditionally found: the central Andean mountain range. This search was done in collaboration with government environmental agencies and also with the local community asking the latter to report to the researchers whenever they saw any member of the species. It took more than 3500 hours of field work extended over the period of 11 months to find the remaining members of the species. The species had abandoned its historical area and its survival seemed threatened.

The search was about to be finalized when a Colombian reported the presence of the species in the countryside. The field researcher investigated this report that was coming from a distant valley in central Colombia. The afternoon of the 18th of April 1999 the researcher heard the weak but distinctive cry of the Yellow-eared parrots. There were two herds of Yellow-eared parrots flying towards the pasture, 61 individuals in total.

Two weeks after an additional herd was found in an adjacent valley. The three herds, 81 individuals in total, used to meet to socialize before resting at night. The following months, researchers collected an enormous amount of data regarding the Yellow-eared parrot ecology and natural history. There was radio transmitters put up to some individuals so that they would give extensive information regarding their location and routes over long periods of time.

Regarding the implementation of the project, there is an additional field study programmed, preservation efforts and environmental education addressed at the local communities. The project Ognorhynchus will benefit another threatened bird species such as the Golden-plumed Parakeet (Leptosittaca branickii), the Rufous-fronted Parakeet (Bolborhynchus ferruginefrons) and the Fuerte’s Parrot (Hapalopsittaca fuertesi). Researchers will also observe and collect data regarding these species while they study the Yellow-eared parrot (Ognorhynchus icterotis).