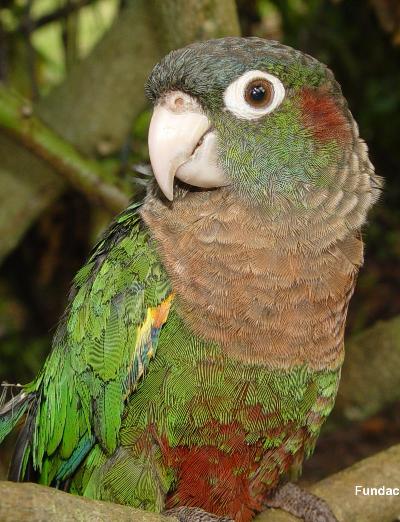 To monitor the population of Pyrrhura Pyrrhura calliptera viridicata and to estimate its population trends.

To intensify studies of the ecology and reproductive biology of P. and P. viridicata calliptera.

To increase the research spectrum on caeruleiceps P. (inc. pantchenckoi ssp) together with the collaboration of the local community.

Implementation of a thesis study on P. m. pacifica . pacifica.

Expansion of the artificial nest initiative for P. viridicata

Monitoring and maintenance of artificial nests.

Implementation of the campaign “Adopt a nest” so as to support the initiative of artificial nests.

Available visits to the “Loro Bus” in the study areas considered for the Pyrrhura Project.

An exploration by ProAves in Cesar Department has discovered an important new population of Todd’s Parakeet (Pyrrhura caeruleiceps) that is considered to be Critically Endangered. This represents only the third extant population of the species and only surviving population in the Serranía de Perijá.

The first images of the threatened Flame-winged Parakeet have been captured within an artifical nest-box as part of Project Pyrrhura supported by Fundación Loro Parque.

A study on a small population of the little known Perijá Parakeet surviving in a highly fragmented forest area near the town of Ocaña, department of Norte de Santander has discovered much exciting new information.