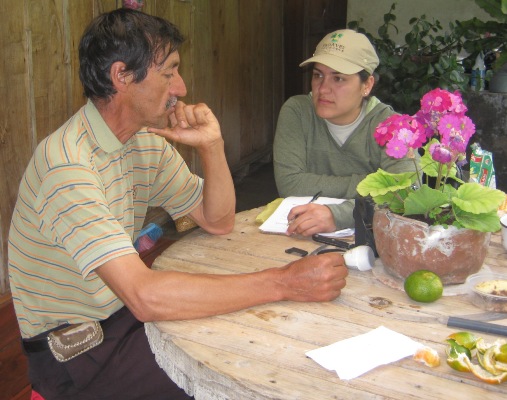 Agreements Reciprocal for Water is a strategy that meets many of the characteristics of the PSA. These are being developed on a medium-scale between the towns of Roncesvalles (Tolima) with Cucuana River Basin (upstream basin serves as a regulator) and the town of Roncesvalles and El Espinal (Tolima) (as downstream bain users of this offer).

The Cucuana basin as a whole has 187,662 hectares (Roncesvalles, San Antonio, Rovira Guamo and Ortega). Just the upper part of the basin in Roncesvalles has more than 11,000 hectares, we are also linking the Cucuanita subbasin with are 8,142 acres, the San Marcos River subbasin, which has 10,183 acres and the watershed of the Quebrada el Arbolito, that has 490 hectares, from which water is taken to the town of Roncesvalles.

The development of the PSA program will benefit more than 10,000 people, including consumption by owners and domestic users and irrigation in the two municipalities.

This project will contribute to the conservation of the Yellow-eared Parrot population of over 800 individuals, plus a large number of species of animals and plants living in these two ecosystems (high Andean forests and plateaus), which are also under some degree threat.

The purpose of this program is to conserve the moorlands and forests in the upper river Cucuana as water regulators and the Yellow-eared Parrot’s habitat, an AZE species and in danger of extinction by paying financial incentives to the owners with the support of the creation of a water fund that will be nourished by resources of the town and the users downstream.

This program will be developed in parallel with a social marketing strategy which will promote a change of behavior in the community, owner and user of the Cucuana Basin.

2. Concessive workshops with communities upstream and down.

4. Meetings with the villages.

6. Law Firm establishment of the fund.