Colombia officially remains the most diverse bird country on the planet, followed by Peru and Brazil with 1834 and 1785 species, respectively.

The 17th edition of the Conservación Colombiana journal  presents the first pictures of the Santa Marta Wren (Troglodytes monticola) in the wild, along with details of the first sighting in more than a decade of this Critically Endangered (CR) species. The species is extremely rare and local and found in a remaining small wilderness area at 3,250 meters on the western flank of the Sierra Nevada de Santa Marta. 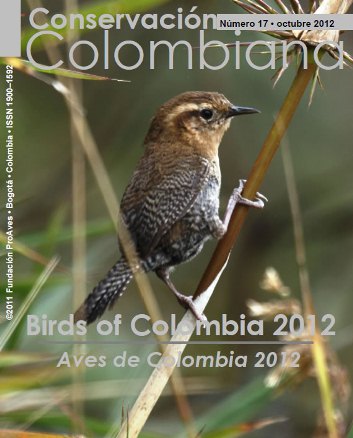 The List of birds in Colombia included in the Conservación Colombiana journal  provides comprehensive and current information on birds in Colombia since the publication of the Field Guide to the Birds of Colombia which ProAves published in 2010. 9 new species were recorded in Colombia, which include: the Crimson Fruitcrow (Haematoderus militaris) and the Varzea Thrush (Turdus sanchezorum),the Antioquia Wren (Thryophilus sernai) and the Spotted Tanager (Tangara punctata) are new records for Colombia, also Snowy Plover (Charadrius nivosus), Marbled Godwit (Limosa fedoa) and Worm-eating Warbler (Helmitheros vermivorum) all become confirmed species, in the latter case to the mainland.  Sulphur-crested Cockatoo (Cacatua galerita) is a new exotic species and Budgerigar  (Melopsittacus undulates) becomes confirmed species in addition to escaped.

Likewise, this edition the threat status of several species was updated and various modifications were made to genus and species names, English names and list order. Following these changes, the new Colombian listed species increased to 1,897.

If you want to contribute information to the List of birds of Colombia next year or have new records of bird species in Colombia, you can write to the following email: foundation @proaves.org

You can also purchase a printed List of birds of Colombia 2010 entering the following address: https://www.proaves.org/guide.