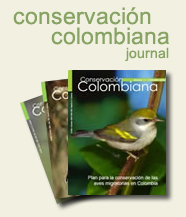 Conservación Colombiana is a scientific journal launched in 2006 and published by Fundación ProAves. The main topic of the journal is the ecology and status of threatened bird species in Colombia.

Fundación ProAves has supported numerous conservation initiatives in the past and is encouraging its own researchers and others to convert informal reports and other publications into a more formal setting and make such materials available to a wider audience. Articles are published in Spanish and English.

Although a majority of the articles in the editions to date are by researchers who have been supported by, or who work with, ProAves, the editors welcome articles from researchers at other institutions and organizations.

List of the Birds of Colombia in Excel file

The editions of Conservación Colombiana published to date are available from Fundación ProAves, email fundacion@proaves.org. The journal is sold at cost ($30.000 pesos / U.S.$10 per issue plus any postage costs).

Editions are available online and for purchase from ProAves at the address and email above. We would like to encourage people to subscribe to the journal (and encourage their libraries to do so).

ProAves, the Grupo Cerúleo and American Bird Conservancy have joined forces to develop and published the “Conservation Plan for the Cerulean Warbler on its Non-breeding Range” in a bid to save one of the world’s most threatened migratory birds. Download the Plan in the journal Conservación Colombiana.

Today, 18 May 2010, the 13th volume of Conservación Colombiana is published and printed editions are available for sale at the ProAves offices in Bogota.

The Colombian Migratory Bird Conservation Plan has been published in the journal Conservación Colombiana. The 160 page Plan presents a comprehensive assessment as to the state of terrestrial Neotropical migratory birds in Colombia and establishes clear priorities for their conservation.

The plight of Polylepis forests in Colombia exposed
Monday 19 October 2009.

The 10th issue of ProAves Conservación Colombiana journal is dedicated to understanding the ecology and conservation of the little-known Polylepis forests. These unique high Andean forests support many endemic flora and fauna species, which are all at great risk. Less than 3% of these forests survive today.

ProAves publishes online the 9th edition of Colombian Conservation , with a synthesis of the results of the study Indicators and Models to evaluate biodiversity changes in the CDM forestry project in the Chinchiná river basin, carried out in the community of Caldas, Colombia and developed by ProAves.

Birds of Colombia: more species but more endangered!
Wednesday 20 May 2009.

The “Checklist to the birds of Colombia 2009” has been published which documents an increase in the number of bird species in Colombia from 1,870 species in 2008 to 1,871 species in 2009. Colombia officially remains the most diverse country for birds on the planet, but sadly, an additional four bird species are considered threatened with extinction in Colombia in 2009.

Seven years of research and conservation by ProAves and Fundacion Loro Parque have been compiled to produce a management and conservation plan for the Critically Endangered Fuertes’s Parrot, now published in Conservation Colombiana.

Officially: Colombia has the most bird species on Earth
May 14 2008.

The checklist to the birds of Colombia 2008” just published by ProAveson line in Conservación Colombiana reveals that Colombia has officially recorded 1,870 species – almost one fifth of all birds known on earth. Sadly, the number of threatened birds has increased.