Camera traps in the ProAves El Paujil Reserve captured a female Spectacled Bear (Tremarctos Ornatus) and her two cubs, a species that is categorized as Vulnerable (VU) according to IUCN. Its altitudinal elevation enhances the importance of this record, as it is perhaps the lowest recorded for the species.

ProAves Foundation implemented monitoring through photo trapping of fauna about four years ago as an innovative research strategy in protected areas.

This methodology involves the installation of automated devices such as camera traps, which allow logging 24 hours a day of all the movements and behavior of animals in a given area that is monitored; these devices once installed hold up to 5,000 photos on their memory cards.

During this research, we have managed to monitor the forests in 12 nature reserves, where we have managed to record 53 species of animals belonging to different orders. The record of 41 species of mammals stands out. We have found that this monitoring strategy is ideal for assessing the status of the populations of mammals present and protected in our system of protected areas.

The main results are related to the record of the Spectacled Bear (Tremarctos Ornatus) in the north-east of Antioquia in the Arrierito Antioqueño bird reserve, an ecosystem strongly transformed and where no recent records of the species existed, and in the Páramo de Frontino in Western Antioquia, in the Natural Bird Reserve Colibrí del Sol.

Likewise, we recorded the presence of this species in the high Andean ecosystems of the Municipalities of Roncesvalles and Cajamarca, in the department of Tolima, where ProAves is present in their system of protected areas. Additionally, we have established the most important records related to the altitudinal range, perhaps the lowest recorded for the species, in El Paujil bird reserve, in the middle Magdalena, an ecosystem that retains the last major remnants of tropical rainforest in this basin and where the presence and reproduction of the species is guaranteed. 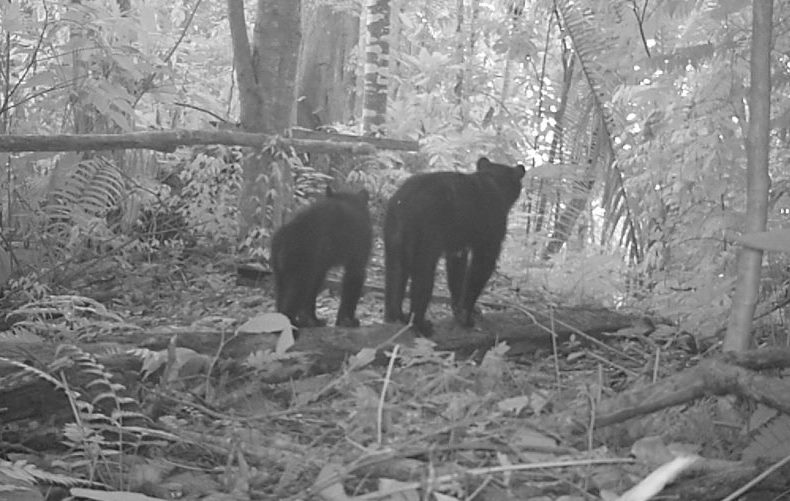 In this reserve in the middle Magdalena, which is a priority ecosystem for conservation because of the advanced fragmentation and habitat destruction in this area of the Andes, a record also was achieved of the subspecies of the South American tapir (Tapirus Terrestris). This is an endangered species and rarely recorded in the wild and of which little is known about their population status.

Besides making continuous monitoring of the first primate species Ateles hybridus, the endangered Brown spider monkey, which approached an area biologically known as a salting area (saladero) and where different aspects of the intra-specific behavior of the species were obtained.

On the eastern plains, at the regional boundaries with the Colombia Amazon, a number of large mammals have been sighted like the Jaguar (Panthera onca), the Tapir (Tapirus terrestris), deer (Mazama Americana) and large groups of peccaries, or wild pigs. This demonstrates the ecological importance of this ecosystem heavily pressurized by the rapid exploitation of non-renewable natural resources in this area of the country and threatening ecological dynamics of species distributed in eastern Colombia.

Additionally, by analyzing images taken in these different areas of the country, it has been possible to establish the existence of different sub species of Mazama americana, which has allowed experts in this area to recognize the need for a thorough taxonomical review of the species.

The camera traps not only allowed us to obtain important records of mammals, thanks to its systematic installation and regular monitoring, it is possible to conduct ongoing monitoring of the Blue-billed Curassow (Crax Alberti), one of the most endangered species in the country. It has been monitored so that its recovery is evident in the Paujil Reserve, with over 150 photographic records that have identified new individuals added each year to the relict population that now shows a promising future.

This method therefore is a great tool for conservationists and research bodies in the country, allowing the study in the wild of cryptic or species shy to the observer and that can generate key information to the development of more specific future conservation plans.