In 2013, Colombia was Reconciled with Nature!

It is a pleasure for ProAves and all the organizations involved to supporting this initiative each year, and we were proud to once again fulfill our commitment to support the conservation of the Wax Palm (our national tree) and the Yellow-eared Parrot, both endangered species.

The campaign aims to promote the conservation of the Yellow-eared Parrot and the Wax Palm nationwide, raising awareness in the community about the use of other alternatives to generate less impact on native flora, by promoting alternative species for the celebration of Palm Sunday.

Information stands, photo exhibitions, children’s painting competitions, plays and an afternoon of music and contests opened the campaign on Sunday March 17, just a week before the celebration of Palm Sunday. These events were supported by at least 1200 people who participated actively in the activities that were planned in each of the municipalities. 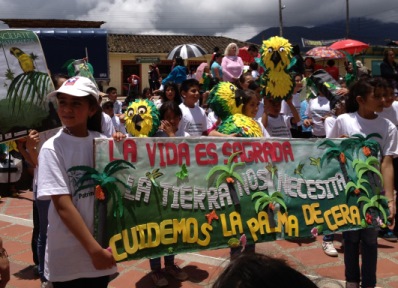 The official launch of the campaign was held on Monday March 18 in the municipalities of Genova (Quindio), Jardín (Antioquia) and Roncesvalles (Tolima), inviting people and community leaders of each municipality in order to generate a commitment to the conservation of these iconic species of our country.

The event was attended by 550 people, including community leaders, representatives of different organizations and the general community of each of the municipalities, it is worth noting the participation of Municipal Mayors of Roncesvalles, Genova and Jardín, the CRQ, Environmental Police, The Civil Defense, the Catholic Church, the Pacific Power Company EPSA, Jardín Public Enterprises, the DMI Cuchilla Jardín – Támesis, among others.

Meanwhile the community of Roncesvalles held a parade through the main streets of town, in which six  institutions were involved. They conveyed a message of belonging and protection for each of the natural resources in this sanctuary of water, flora and fauna. 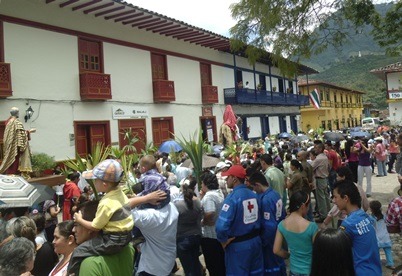 The central event of the campaign with the participation of at least 3000 people, was held on Sunday March 24, during the celebration of Palm Sunday. We gave out 800 Iraca branches, 500 trees, 100 potted ornamental plants and 500 green ribbons in recognition of the community’s commitment to this initiative.

During this event, several recreational and cultural activities were developed to engage the community more actively. In Genova the Symphony Orchestra of the Buenavista gave a concert before the Eucharist celebration, and additionally an information stand was developed with the support of the CRQ, the Tibocuchina Foundation, the Committee of Coffee Growers and the National Police.

Moreover, in the municipalities of Urrao and El Carmen de Atrato we had the participation of the rock band Eternal Passion, who gave a concert and supported us in delivering community trees in commemoration of this event.

We want to take this opportunity to thank all the organizations that participated in this conservation initiative and supported us in the development of the activities: the Municipal Mayors of Roncesvalles (Tolima), Genova (Quindio), Jardín (Antioquia), Zapatoca ( Santander), El Carmen de Atrato (Chocó), Urrao (Antioquia), CRQ, CORANTIOQUIA, CAS, Catholic Church, Pacific Power Company EPSA, Environmental Police, Youth Group Jardín Parish, Eco Friends of Birds Groups, Young Researchers and Social Service for ProAves, and the whole communities of the municipalities concerned for their commitment and full support for the conservation of biodiversity of our country.