ProAves, the University of Antioquia, the Loro Parque Foundation and the Mayor of Jardín, in the department of Antioquia, seek to conserve the water that feeds the town of Jardín, through the implementation of the ARAS strategy, Reciprocal Agreements for Water.

The project “Conservation of the High Andean forests and the Mendoza reserve and the Quebrada Bonita watersheds in the municipality of Jardín, Antioquia, by implementing Reciprocal Agreements for Water and Civic Pride campaigns” is underway.

This project is a strategy for the conservation and protection of the watersheds and endangered species in the municipality of Jardín. This project will allow environmental service providers to receive an incentive for conservation. It will encourage a cultural shift towards the management and the friendly use of natural resources by the users of environmental services. They will receive reliable quantities of potable water, generating a sense of belonging among the community of the municipality.

Similarly, it conserves the habitat of species of high ecological importance such as the Yellow-eared Parrot (Ognorhynchus icterotis) and Dusky Starfrontlet Hummingbird (Coeligena orina), the Andean Cock-of-the-rocks (Rupicola peruviana), the Spectacled Bear (Tremarctos ornatus) and deer, as well as the Wax Palm (Ceroxylon quindiuense) and a species of Passiflora endemic to the area of Jardín (Passiflora jardinensis).

The project includes two strategies, the first is a Civic Pride Campaign (a strategy that implements the methodology of social marketing) and the second is Reciprocal Agreements for Water (ARAS) to forest owners in the catchments of Quebrada Bonita and Herrera.

For 2013 this project is receiving valuable support from the University of Antioquia, the Mayor of Jardín and CORANTIOQUIA. This ensures that the residents of Jardín continue to receive the quality and quantity of water they need.

Jardín is characterized by the creation of a number of public and private nature reserves.

Important sources of water arise there, among which are: the Mendoza basin and the Quebrada Bonita that supply the Jardín water systemt, the Juntas, Venadas and el Tacón streams that produce the Frio River, whose flow is used considered for power generation, the Claro, Dojurgo and upper San Juan Rivers.

Besides these, also located within the area, there are small creeks and streams that increase the water resources. Some of the families who live there grow produce for their own consumption and to sell in the city; others have cattle for meat, sale of milk and dairy products.

One of the first actions has been the process of explaining the project to the urban community who make up the “Water Fund“, by means of various activities.  We have been able to inform more than 500 people, of whom the vast majority have been positive towards the project that ultimately seeks the welfare of the community through joint work for the conservation of the vital liquid and endangered species in the municipality. 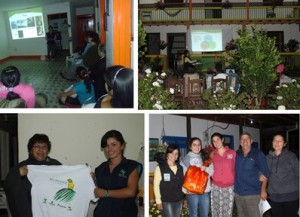 Explaining the ARAS project in the town and distributing ProAves Tshirts.

To date seven of the nine representatives have been elected to the project’s conservation committee and the first official meeting will be held in the coming months.

The campaign is strengthened by activities such as information stands, distribution of leaflets, posters, educational materials, workshops and community meetings with the owners and residents of the Quebrada Bonita area, and with other entities that support the process.