Assessing the role of oak forests and a system of protected areas in the conservation of threatened birds.

Oak forests are one of the most threatened ecosystems in the northern Andes and home to one of the most specialized and endangered avifauna of the region. The Corredor Norandino de Roble is the largest remnant of oak forests in the Eastern Cordillera of Colombia and, although it includes two protected areas – Fauna and Flora Sanctuary Guanetá-Alto Rio Fonce and the Biological Reserve Cachalú – is under heavy logging and hunting pressure from local communities. Four species of globally threatened birds depend on this ecosystem: Odontophorus strophium, Hapalopsittaca amazonina, Coeligena prunellei and Macroagelaius subalaris. Three of these species are endemic, and at the date of commencement of this project, very little was known about their biology and conservation. In order to design a strategy for the conservation of oak woodlands Proyecto Corredor Norandino and the species that depend on them, a group of students formed the North Andean Corridor Project in 2003.

• Locate, map and characterize the areas occupied by the four species mentioned in the town of Encino.

• Estimate the population density of species of interest and their fluctuations over one year.

• Identify and measure human impacts that affect wildlife and their habitats in Encino, with special emphasis on the three target species.

• Promote environmental awareness and conservation of threatened birds and oak forests with the local community.

• Investigations: 12 sites surveyed in 5 towns in the corridor for 72 days.

• The highest abundances of O. strophium, C. prunellei and H. amazonina were recorded from December to February. Peak abundance of M. subalaris was recorded in July and October.

• Collection of information on habitat use, diet, reproduction and population dynamics of four birds per month and related species.

• Maps of known distribution and historic and current potential for all four species were generated.

• Losses of favorable area for the presence of these birds as well as current densities were estimated.

• Expansion of agricultural frontier for potato crops and livestock.

• Extraction of oak wood in 97% of the population. Crafts and fences.

• Use of pesticides on crops. 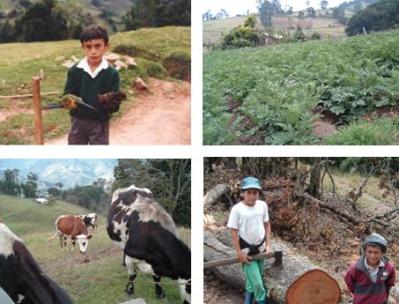 • Program in Cachalú on stereo radio.

• Monthly awareness sessions in three villages of the municipality.

This study demonstrated the importance of oak forests for the survival of O. strophium, H. a. amazonina, C. prunellei and M. subalaris. H. amazonina feeds on the fruits of oak, but the relationship of the other species with these trees has not been fully disclosed, and should be subject to future research. Monitoring of these species is recommended in Encino and other towns as well as studies of foraging ecology, reproduction and habitat characterization.

Existing protected areas over the remaining distribution of these species are insufficient to hold viable populations. It is recommended to determine the effect of factors acting at the landscape scale on the distribution and abundance of species studied.

The remaining distribution maps and exploration by this and other projects identified the NorAndino Oak Corridor and the Serrania de Yariguíes as the most important areas for these species. Actions aimed at the conservation of these two areas must be strengthened.

The results indicate that the current status of these species is much better than that assumed in the evaluations of BirdLife International (2004) and Renjifo et al. (2002). The following threat reclassifications were proposed:

However, more research is required to reach density estimates approximate to reality.

We thank our donors American Bird Conservancy, the Department of Fisheries and Wildlife, U.S. Endangered Species Initiative (IEA) of Conservation International and Omacha Foundation for sponsoring this project. Similarly, Fundación Natura, especially Carolina and Clara Roa Solano, for their support during all phases of the project as well as the Encino Town Council. For their assistance in the field we thank Jorge Contreras, Eliecer Leon Fermin Cardenas. Finally, we appreciate the tremendous support and enthusiasm provided to the project by local communities in the study area.