With support from American Bird Conservancy, in 2005 and 2006 the Foundation ProAves implemented a project of identification of Polylepis (Coloradito) forests and their associated avifauna.

The project was divided into two components:

I. Avifauna associated with Polylepis forests in Colombia

A list of species recorded in forests of · Polylepis · in Colombia and species that were considered likely were included. Through a literature review information was compiled and used to categorize and analyze aspects of probability on distribution, ecology and conservation of the species. 41 species were found recorded in · Polylepis × 104 were proposed as probable and a total of 12 recorded species are very likely to have some category of threat. The analysis of distribution and ecology suggest that for the birds in the forests of · Polylepis · in Colombia this is a marginal habitat and also includes elements of high-Andean forest, but it is definitely and urgent the need to conduct a field study. 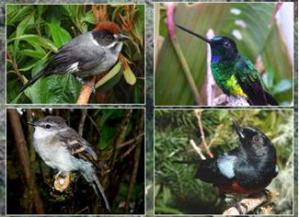 Some birds associated with Polylepis

In the upper parts of our mountains, above the upper limit of forest vegetation of the Andean region (3200-3600 m), the forests are dominated by species of Polylepis (Coloradito), which currently have a very small range and harbor a very peculiar biota, becoming the last refuge for animal species that require more protected environments in part of their life cycle. In the three Andean sections of Colombia Polylepis forests can be found, they are absent in the massifs of the Sierra Nevada de Santa Marta and the Serrania del Perijá. 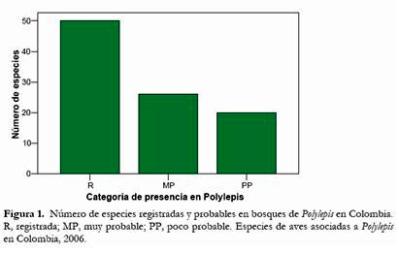 Most sites with Coloradito forests have been much altered. Sometimes this species is the only source of energy (firewood) available to residents and land for demarcation processes. Forests dominated by Polylepis quadrijuga are common on the western slopes overlooking the Magdalena River in the Cordillera Oriental and in the mountains of the Cordillera Occidental Frontino. In the Cordillera Central the forests are of Polylepis sericea.

Physiognomic arrangements include high scrub, scrub forests and on the border with the Andean region, tall forests. The state of transformation and fragmentation is very high and most of the sites are threatened by the transforming action of man and especially the altitudinal rise of potatoes.

The paleoecological history shows that  Polylepis  appeared in the eastern mountains some 3 million years ago and formed extensive forests of distribution between 1.5 and 1.2 million years BP in the savannah of Bogotá of · Polylepis forests disappeared about 30,000 years ago and other areas such as around the lagoon Fúquene and in the mountains of Central and Western mountain ranges, the paleoecological evidence shows a sharp decline in natural populations. The assessment of current threats and paleoecological history permit us to conclude that these relict patches of woody vegetation must be given priority conservation.