On January 3-7, 2009, the ProAves Council met with senior ProAves staff in Reserva Natural de las Aves El Dorado,  to plan the future five years of the Foundation with a five year strategic plan, 2009-2013. The draft plan was designed in a previous meeting of ProAves staff and refined over the three day meeting. 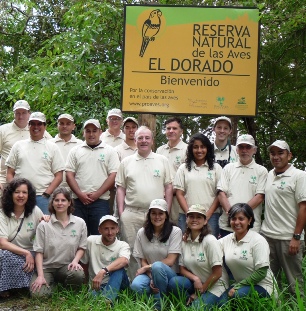 The meeting consisted in an overview of ProAves by staff directors of the organizational, conservation, research, environmental education and communications areas, and discussed the vision and priorities for ProAves. Sessions continued with a two-day review of the 5-year ProAves strategy plan.

Evening presentations included themes of finance, funding and opportunities by the Executive Director, Sara Inés Lara and a presentation about ecotourism by EcoTurs. Council members also met to define its future directions and establish its rules and regulations.

This planning is extremely important as ProAves completes ten year of conservation and looks ahead to another decade. The immediate future will be critical for conservation as Colombia’s rapidly changing social and economic situation may accelerate the loss of the most important remnants of natural habitat in the Andes and Chocó regions. However, we were humbled looking back at the past five year plan (2003-2008) as our conservation achievements exceeded our greatest expectations.

The meeting in the El Dorado reserve was followed by a tour to some ProAves reserves by Council members.