The “Women for Conservation” program by ProAves has trained 44 women around four reserves on the sustainable use of natural resources. These resources are used for handmade jewelry such as necklaces and bracelets, hand-painted objects, embroidered bracelets, and book markers.

ProAves sells the final products in gift shops located at the reserves, at special events, ornithological gatherings, and exhibitions throughout the world. The proceeds go directly to the community, where they provide income and encourage a positive attitude towards the reserves by local populations.

Tagua, also known as marfil nut or vegetable ivory, is the seed of the Tagua palm tree Phytelephas macrocarpa. It grows in humid tropical woods commonly found in Panama, Colombia and Ecuador. (Wikipedia)

We would like to invite you to learn more about how Tagua seed is collected:

Left. Primary woods, the natural habitat of Tagua. Right. This is the Tagua palm.

The Tagua palm grows in the center of the woods, and is surrounded by distinct species of flora. It prefers low and humid areas.

The seeds grow at the base of the palm, inside a shell or a “morula”, that is quite hard. Every morula holds approximately twenty (20) Taguas. It is difficult to calculate how many morulas there are per a palm tree, but there may be as many as ten (10) morulas in different stages of maturation.

The seed must be completely hard (gecha in the local dialect) before it can be extracted from the palm.

Morulas at the base of the palm tree.

One must make a small, deep cut on the morula to know if it is ready for extraction.

After the test incision, the morula is separated from the base of the palm tree. Once several morula have been collected, the next step is to extract the seeds from the morula. A hammer must be used to open the morula due to the shell’s hardness.

The Taguas of this type come out nearly clean. It is sufficient to sand and wash the Tagua at the beginning of the cutting and tinting process.

There are other forms of collecting Tagua, such as gathering them from the forest floor. One can find some Tagua that animals dropped or left behind in their feeding process. Tagua found by these methods are slightly older and harder to process. A Tagua found on the ground is protected in a hard shell that is quite difficult to remove. The process of shell removal in these cases requires an additional step, and lowers the commercial value of the seeds.

Below is a sample of the artesian crafts made from Tagua:

Bracelette with Tagua and acrylic and Triangular Tagua. 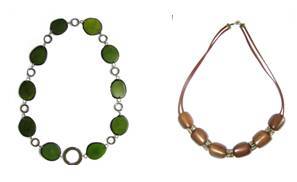 Sliced Tagua and metal and Flat Tagua and leather.

With the support of American Bird Conservancy and Audubon Naturalist Society, ProAves is expanding its successful program Women for Conservation, in order to protect four of its natural reserves. This will be carried out as a way of promoting business opportunities for the rural women who live in communities neighboring reserves.

In many ways the local communities can pose a challenge to the management of the reserves, because they tend to cut down woods to clear land for cultivation or to sell the wood, and often they must resort to hunting the local wildlife or to chopping down the trees for fuel as firewood.

With the help of ABC and the Audubon Naturalist Society, ProAves is now expanding the program to other communities, thus helping to alleviate the pressures on the protected natural wildlife resources in our reserves.