The Rusty-faced Parrot (Hapalopsittaca amazonina) is categorized as Vulnerable, primarily due to the small size of its population and the loss and fragmentation of its habitat caused by the expansion of the agricultural frontier in the Andean forest. For their protection  ProAves created the Colibri del Sol Bird Reserve in 2005, with support from the American Bird Conservancy. The reserve is located in the municipality of Urrao, Antioquia, and covers an area of 1,806 acres of high Andean forest and paramo habitat of the Dusky Starfrontlet (Coligena orina),which is critically endangered.

During the months of October to December 2012, the Rusty-faced Parrot occupied two new artificial nests in the Colibri del Sol Reserve. This reproductive success is due to the initial support provided, in 2008, by The Zoological Society for the Conservation of Species and Populations (ZGAP) that allowed the preliminary study of the natural history of the species in Colombia and the continued support of the project provided by Loro Parque Fundación and American Bird Conservancy. 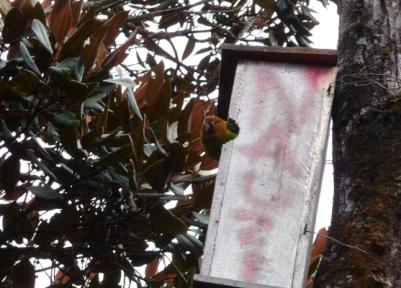 Artificial nestbox occupied by the Rusty-faced Parrot in the

After the first breeding event which occurred between April and July 2012, we celebrated the occupation of two new artificial nestboxes that are being used by this species of parrot in the Colibri del Sol Reserve. Monitoring has been done since September of the two couples which occupied the two artificial nests. In mid-December a photograph was taken of the chick in one of the nests, the other is being used and is being monitored to assess its development.

The monitoring and follow-up activities have identified that one nest has an egg, located at 3,286m altitude, and 1 chick in another nest, at 3,247m, each cared for by a pair; to date the chick from one of the nests is about to fledge while the other couple continued looking after their egg. 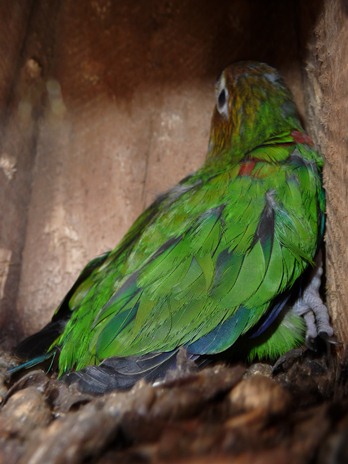 Rusty-faced Parrot in a nestbox

2012 was a very successful year for the conservation of the species, after five years conserving and researching the reproductive biology of the Rusty-faced Parrot, in addition to the occupation of the three artificial nests, important records and breeding population censuses were achieved.

The conservation initiative for threatened parrot species through the artificial nestboxes program is aimed at providing cavities for reproduction of parrot species in Colombia. The occupation of these nests suggests the success of the initiative and encourages us to continue these conservation activities at each site where the program has been implemented and to promote the involvement of new institutions that promote the conservation of priority species in Colombia.

To prevent the extinction of a parrot species in Colombia you can support us through your online donation to Adopt a nest, which will sponsor the activities of exploration, construction, monitoring and assessment of natural and artificial nests for a year of some of the most endangered parrot species in the country. To donate, simply click here to complete the adoption form.