The Cerulean Warbler Conservation Corridor, established by ProAves in 2008, aims to protect the habitats of resident endemic and endangered species, which also provide wintering grounds for and allow the passage of migratory birds such as  Cerulean Warblers (Dendroica cerulea) and Golden-winged Warblers (Vermivora crisoptera).

The Corridor connects the two bird reserves: the Cerulean Warbler Reserve, located in the Serranía de los Yariguíes, and the Helmeted Curassow Reserve, in the Cerro de la Paz, both in the municipality of San Vicente de Chucurí, Santander. This permits  restoration of the connectivity and gene flow of flora and fauna of the species in this important area of the country.

Strategic conservation approaches that are being developed in the Corridor are:

1) Community engagement. In 2012 an education process was initiated for families that are located in the catchment area of the project, focusing on the conservation and protection of flora and fauna. It is planned to train more than 100 families this year. 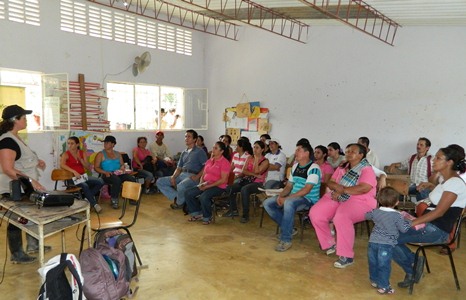 2) Establishment of agroforestry and silvopastoral systems, shade crops (coffee and cocoa), hedgerows and Ecological Easements. As one of the main threats is the destruction of ecosystems caused by poor farming practices in the region,  our efforts have been focused on implementing environmentally sound practices, allowing improved production of crops under shade, and ensuring environmental services (availability of water, oxygen and food), transit of species of great importance to the area and ultimately improve the quality of life for local families.

On 19 December 2012, as a further example of the commitment and concern for conservation in the community, the eleventh Ecological Easement was signed with the owner Brahanfor Corzo which will last for 15 years.

Currently in the Bird Reserves of the Cerulean Warbler and Helmeted Curassow there are large tree nurseries where 24 native species are grown, including Leucaena, Móncoro, Nauno, Saman, Abarco, Bucaro, Common Cedro, Citrus, Guanábano, Aro , among others. The nursery Esperanza Verde is located in the Cerulean Warbler Reserve and currently has 26,950 native seedlings and the Mata de Cacao nursery is located in the Helmeted Curassow Reserve which has 23,351 production seedlings.

4) Reforestation and restoration of native flora.

An important commitment ProAves acquired with the municipality of San Vicente de Cuchurí, is the reforestation and natural restoration of 1100 acres, in the period between 2012 and 2013, to reach this goal ??farm by farm visits have been made and about 7,000 trees have been delivered to 30 owners.

Thanks to the support of donor agencies (American Bird Conservancy, Robert Giles, NMBCA and Fondo para la Acción Ambiental y la Niñez) and the dedicated work of ProAves for more than 13 years, we continue to advance our support for conservation in the country of birds.