The “Checklist to the birds of Colombia 2009” has been published by ProAves which documents an increase in the number of bird species in Colombia from 1,870 species in 2008 to 1,871 species in 2009. Colombia officially remains the most diverse country for birds on the planet, with Peru and Brazil with 1,822 and 1,777 species, respectively.

ProAves has maintained the “Checklist to the Birds of Colombia” since 2007 and same lead author since first publication in 2001. The checklist updates information in the distribution and taxonomy of birds that occur in Colombia. The 2009 checklist has undertaken a major revision of confirmed species for the country and provides the first confirmed record of the Neotropical migrant – the Yellow-throated Warbler. 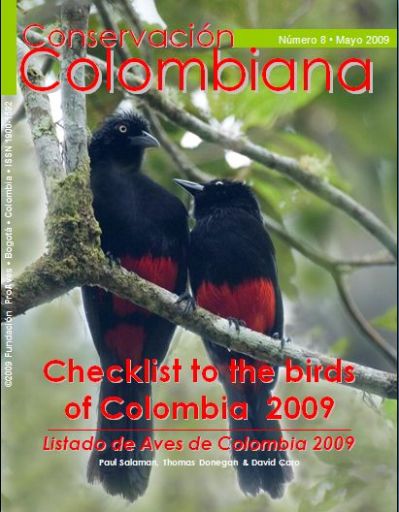 The checklist also updates the threatened status of all species following an extensive review process by BirdLife International with the collaboration of ProAves and many others. Sadly, a further four bird species are threatened with extinction in Colombia, including two Critically Endangered species, the Gorgeted Puffleg Eriocnemis isabellae and Antioquia Brush-finch Atlapetes blancae that appear for the first time on the BirdLife/IUCN Red List. Both species were recently described from extremely small areas lacking any protection. Searches by ProAves and other researchers for the Antioquia Brush-finch have failed to locate any surviving populations, although hope remains that a small population survives.

Presently, Colombia has a total of 97 threatened bird species, 60 Near-threatened species and 6 Data Deficient species that are pending further information.

If you would like to contribute to the checklist, please email listado@proaves.org. Presently, the National Bird Records Forum for Colombia is being organized to oversee the national list.

The checklist is bi-lingual and freely available as a líne. An Excel version of the checklist will also shortly be available online for researchers and birders. You can buy the 81 page 2008 checklist from Fundación ProAves or online at http://www.nhbs.com/title.php?tefno=160362.