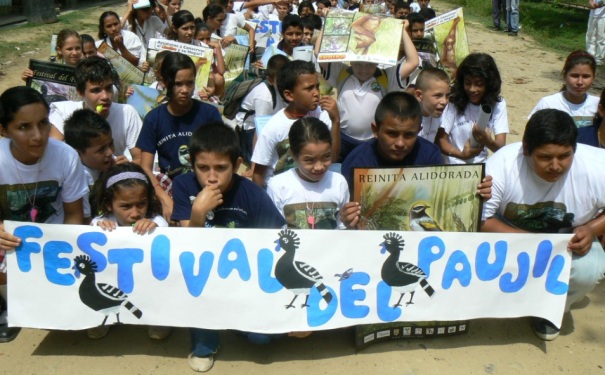 This is a dynamic and educational event where diverse activities for all the community, especially kids and youngsters living closer to the Blue-billed Curassow Natural Bird Reserve, take place, where ProAves focuses conservation efforts for this species.

The Festival intends to increase the interest of the community in the conservationist programmes carried out by ProAves, changing the way people sees and thinks about the Blue-billed Curassow.

With the participation of over 400 people, the 8th Blue-billed Curassow Festival was held in the town of Puerto Pinzón in Boyacá, aiming to raise awareness among communities, especially children and young people who live beside the area El Paujil Bird Reserve.

More than 830 people took part in the 5th Blue-billed Curassow Festival that was held in September in the town of Puerto Boyacá and villages of La Arenosa, Quince Letras and Dos Quebrados, in Boyaca and Santander Departments.

With the completion of 23 environmental workshops and the participation of over 800 people, the 4th Blue-billed Curassow Festival was conducted in the Magdalena valley.