Colombia reaffirmed as #1 nation for birds

Fundación ProAves has publishes selected papers from the 15th volume of its scientific journal Conservación Colombiana, The print edition will be available on 31 October 2011. This edition includes no less than five scientific papers discussing records of new bird species for Colombia, plus its now annual paper on revisions to Checklist of the Birds of Colombia. Together, these publications document that a total of 1,889 bird species occur in Colombia.

The “Checklist of the birds of Colombia” has been annually maintained by ProAves since 2007 and with the same lead author since its first publication in 2001. The number of bird species recorded in Colombia has climbed from 1,869 species in 2007 to 1871 species in 2009, 1,879 in 2010, and now 1889 in October 2011. This increase is despite the removal of several species based on dubious old or unsupported records and taxonomic reviews resulting in the ‘lumping’ of various species during this period. The recent glut of newly recorded species for the country has resulted from greater birdwatching and ornithological activity in Colombia following the return of security to many regions, resulting in new records and findings relevant to taxonomy. It seems likely, at this rate, that Colombia will become the first country in the world to break through the 1,900 bird species barrier within the next two years. ProAves is announcing a prize for the person that confirms the 1,900th bird species for Colombia!

Colombia officially remains the most diverse country for birds on the planet, with second and third placed countries Peru and Brazil considered to hold 1,834 and 1,785 bird species each, respectively.

The checklist revision paper in Conservación Colombiana provides a comprehensive peer-reviewed update on the birdlife of Colombia. Five new species recorded in Colombia include the Yellow-bellied Sapsucker (Sphyrapicus varius) and Scissor-tailed Flycatcher (Tyrannus forficatus) – both new records for South America of nearctic migrants, while Rufous-breasted Wood-Quail (Odontophorus speciosus), White-bellied Parrot (Pionites leucogaster) and Masked Water-tyrant Fluvicola nengeta are new confirmed records for Colombia of species previously known to occur in northern Ecuador. A review of the Thrush-like Manakins or Schiffornis is presented, which concludes that at least five species should be recognised in this group, three of which occur in Colombia. Other new records and splits published in the literature are also discussed. 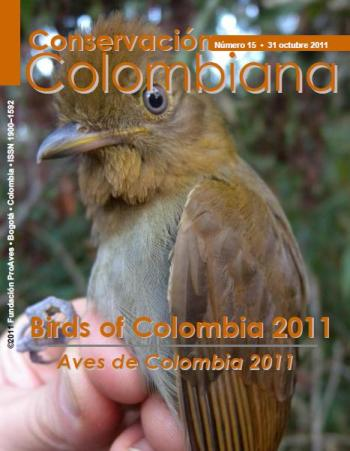 The 15th volume of Conservación Colombiana also contains a paper on the rediscovery of the Santa Marta Tree-Rat or Toro (Santamartamys rufodorsalis) after 113 years in ProAves’ El Dorado Nature Reserve, following-up on the news flash of the rediscovery in May 2011. A study of the population of Brown-throated Parakeet (Aratinga pertinax) on San Andrés island concludes that subspecies aeruginosa of northern Colombia has been introduced to the Caribbean region for the first time.

Fundación ProAves has also published detailed information on the conservation status of 16 bird species found in Colombia based on research by its staff and researchers mostly in the ProAves reserve network. This data was previously presented to BirdLife International and the IUCN for purposes of their threatened species status review process in 2010-2011. ProAves recommended upgrading the status of two endemics of Sierra Nevada de Santa Marta (Black-backed Thornbill Ramphomicron dorsale [LC] and Santa Marta Wren Troglodytes monticola [VU]) whose precarious status had previously been overlooked. Critically Endangered status was recommended for two species largely only known from ProAves’ Colibri del Sol Bird Reserve in western Antioquia Dept (Fenwick’s Antpitta Grallaria fenwickorum and Paramillo Tapaculo Scytalopus canus). Recently, IUCN red list coordinator for birds, BirdLife International, concurred with the majority of our assessments and upgraded both the Santa Marta Wren and Fenwick’s Antpitta to Critically Endangered redlist status and Paramillo Tapaculo and Black-backed Thornbill to Endangered status – all of which were either major changes or new for the IUCN redlist. Sadly, there are now 95 Globally Threatened bird species occurring in Colombia (up from 78 in 2001) and 63 Near-threatened species (up from 43 in 2001).

If you would like to contribute data for the checklist for next year’s review or have other new records on Colombian birds, please email  fundacion@proaves.org

You can buy the 2010 checklist online here . An updated Excel version of the checklist will also shortly be available online for researchers and birders.

Conservación Colombiana is published with the support of: