One of the largest and least known of South American mammals, the Critically Endangered Colombian Tapir (Tapirus terrestris columbianus), has been almost completely exterminated by hunting and the loss of 97% of its habitat. For a decade it was considered almost extinct in the center of the country due to heavy hunting pressure and forest clearing in central Colombia, with only a few remaining individuals left.

After more than 10 years, an individual was photographed in the El Paujil Bird Reserve. The reserve was created in 2003 with support from the American Bird Conservancy and the Global Conservation Fund, in order to preserve the Blue-billed Curassow (Crax alberti), endemic to Colombia and critically endangered, the Spider Monkey (Atele shybridus), also critically endangered, and the Spectacled Bear (Tremarcto sornatus). Of the latter, we have a record from 2011, also in camera traps, which confirmed its presence in the lowlands.

Later in 2008, and with the support of WLT- U.S., the protected area was extended to over 8,000 acres of forest. This finding highlights the urgency of further expanding the reserve to restore and protect what little remains of this unique habitat in the valley of the Magdalena and its incredible wildlife.

Described by Hershkovitz (1954), the Colombian Tapir is confined to Colombia, originally distributed through the lowlands to the south, from the Caribbean coast through the Cauca and Magdalena valleys. The Tapir’s habitat has been lost or almost completely transformed.

The species was photographed for the first time by camera traps in 2008 by researchers at the UNAM (National Autonomous University of Mexico); follow-up studies placed a small surviving population on the northern slope of the Sierra Nevada de Santa Marta.

So far there have been two additional sightings reported by residents of the area in the mid-Valley of the Magdalena River in El Paujil Reserve. 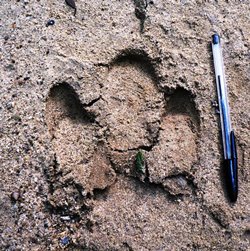 On November 7, 2012, a group of birders who visited the reserve on a tour led by ProAves and guided by Trevor Ellery, found fresh tracks of Colombian Tapir. The group walked down one of the main trails of the reserve when they found fresh tracks on the bank of a stream which they followed for several hundred yards, then, on November 9, 2012, two days after the first sighting, a camera trap confirmed the presence of this elusive and rare mammal.

After this long absence it is encouraging to know that the species currently has 8,000 acres protected in perpetuity as well as the 3 rangers who protect them daily; ProAves will continue with monitoring , in order to obtain more ecological information on the species.