Every year during Holy Week (Easter), Colombians meet to celebrate Holy Week, a rite of spiritual reflection looking to renew their hearts. The use of Wax Palm branches has been customary for the congregation at the beginning of this celebration on Palm Sunday, the symbolic representation of welcoming Jesus Christ to the city of Jerusalem.

Such a representation ritual is leading to the extinction of one of our national symbols, the Wax Palm (Ceroxylon quindiuense) ,a national tree endemic to Colombia,  and also the unique natural habitat of the Yellow-eared Parrot (Ognorhynchus icterotis) a bird listed as endangered by the International Union for Conservation of Nature (IUCN).

The Campaign, now in its twelfth year, has been held in different regions of the country, led by ProAves and  supported by organizations such as Empresa de Energía del Pacifico EPSA, the municipal authorities of Génova (Quindio), Jardín (Antioquia) and Roncesvalles (Tolima), the Ministry of Environment and Sustainable Development, the Episcopal Conference of Colombia, the National Police and various media locally, nationally and internationally.

The main objective of the campaign is to promote the conservation of the Yellow-eared Parrot and the Wax Palm nationwide, raising awareness throughout the community about the use of other alternatives that create less impact on native flora species, such as promoting the Iraca Palm, Areca Palm, Pine trees or live plants for the Palm Sunday celebration. 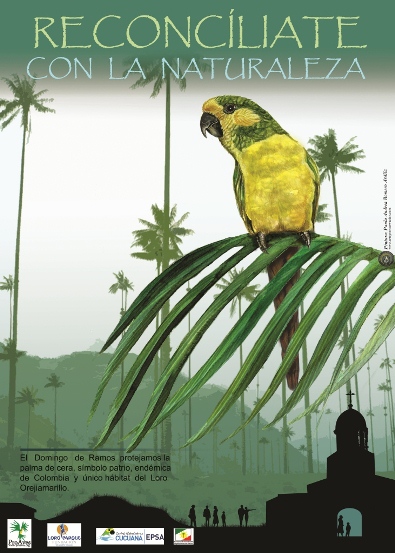 
The official launch of the XII version Campaign Reconcile with Nature by ProAves will be held on Monday, March 18, a week before the celebration of Palm Sunday, with a simultaneous event in the towns of Génova (Quindio), Jardín (Antioquia) and Roncesvalles (Tolima), and seeks to strengthen the conservation message relating to the Wax Palm and the Yellow-eared Parrot in the towns where ProAves has established nature reserves in order to protect these two species.

This event is expected to include the participation of the leading institutions in each town, and the municipal government, parishes, corporations, Secretaries of Agriculture and Environment, and  each year more entities are participating in this important celebration.

It is important to highlight the essential support given by the Friends of Birds Environmental Groups (Polluelos, Amigos de las Aves, Social Service, Young Researchers and Bird Friendly Schools), since they are the best of our broadcasters and replicators of the message of conservation and those who will be supporting us in all the activities during this campaign.

In addition to the launch event, during the month of March ecological workshops will be held in Educational Institutions in their respective towns, socialization work with the populations of the rural areas with the support of the Community Action Boards, as these towns are found to be more in touch with the key species of the campaign, thus requiring more knowledge to achieve a broader awareness and are key actors in ensuring the excellent reception for this campaign.

Likewise, massive assistance environmental and leisure activities will be held such as painting in the park, films in the park, contests, nature walks, bird watching outings to the ProAves’ Bird Reserves (Yellow-eared Parrot Reserve, Fuertes’s Parrot Reserve, Andean Parrots Reserve) and reforestation activities involving students. The painting of Murals alludes to the conservation of biodiversity in the region, where they illustrate the Yellow-eared Parrot and Wax Palm as flagship species.

The central event of the campaign will be held on Sunday March 24, as part of the Palm Sunday celebration in each town, and is the appropriate place to take our message of conservation, There in the presence of the whole community, ProAves be delivering live plants and alternative other species to parishioners for use in this commemoration; in addition green ribbons will be given out that represent each parishioner’s commitment to protecting the Wax Palm and Yellow-eared Parrot.

This is an invitation for all Colombians during this Easter week to reconcile with nature!