International EcoTourism Initiative to Save Birds

American Bird Conservancy and its partners in 12 countries throughout the Americas have launched a new, international birdwatching tourism initiative aimed at preventing the extinction of bird species. The initiative known as “Conservation Birding,” will help to finance bird reserves across the Americas by developing them as birding tourism destinations with lodges, trails, and other facilities for visitors.

The partners have already created thirty-six reserves, 18 of which have visitor accommodations on site. These reserves include more than 250,000 acres of critically important bird habitat, providing refuge for more than 2,000 bird species-nearly half of the total found throughout all the Americas. Some of the world’s most endangered species are among them. These include the spectacular Yellow-eared Parrot in Tolima, the Dusky Starfrontlet hummingbird in Antioquia, and the enigmatic Blue-billed Curassow in Boyaca. Many of the reserves also provide key wintering habitat for migratory birds, such as the declining Cerulean Warbler, that nest in the United States.

“International birding travel is already popular, and we want more birders to know that their pastime can actually contribute to saving the species they love,” said Mike Parr, Vice President of American Bird Conservancy. “Visiting birders can provide a source of direct financial support to the reserves, helping them become self-sufficient and sustainable in the long-term.”

Visitors can browse reserves online by visiting the new Conservation Birding website at www.conservationbirding.org. The site has been designed specifically to help visitors plan their birding trips to help conservation, by presenting detailed information on the reserves and ecolodges established by the conservation groups. A Google Earth component adds another dimension to the site, presenting suggested routes, photographs of lodges and birds, and videos of rare and interesting species. 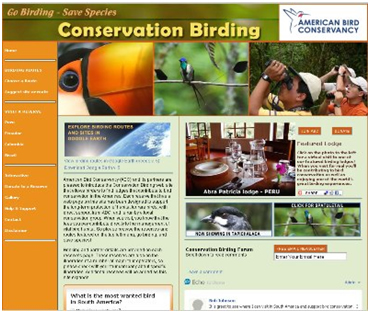 “Birdwatching in the U.S. has millions of participants who contribute billions of dollars to the economy through the purchase of equipment, travel, books, and bird seed for backyard feeders,” said Parr. “The groups behind the Conservation Birding initiative aim to tap into this market to cover the costs of managing habitat at each of these rare bird reserves.”

Eighteen of the reserves protect Alliance for Zero Extinction sites – the last refuges for some of the world’s rarest species. Not only are these places important for birds, but a new study has shown that they are often carbon stores, watersheds, and even cultural centers, since they exhibit high diversity among rare indigenous languages.

One country where birding tourism is rapidly gaining popularity is Colombia, and one lucky group of birders recently made a special discovery when they found a previously unknown species of owl – the Santa Marta Screech-owl Megascops gilesi at one of the reserves there – located during an American Bird Conservancy-led bird tour to the El Dorado Reserve in the Sierra Nevada de Santa Marta. Another previously unknown species of antpitta was recently discovered at another one of the Colombian reserves by two reserve staff.

The partners plan to continue growing the reserve network, and hope to add at least two new reserves in the near future. The work is supported by a range of donors including Conservation International, the Jeniam Foundation, the Gordon and Betty Moore Foundation, New York philanthropist Robert Wilson, and many additional individual donors. If you would like to help purchase land for a reserve, or support the conservation of the reserves in another way, please contact us at ProAves.

How many birds are there in the world?

There are approximately 10,000 bird species in the world.

What is the world’s rarest bird?

There are a number of bird species that have not been recorded in the wild in recent years and may or may not be extinct. The Ivory-billed Woodpecker is a recent high-profile example. The Hawaiian Crow is presently the rarest bird known to persist in the United States. However, the entire population of less than 100 birds is currently held in captivity. Several other species around the world are only known in captivity at present, following the extinction of their wild populations. These include the Socorro Dove, the Spix’s Macaw, and the Alagoas Curassow.

Ecotourism provides a significant contribution to the economies of many countries around the world. South Africa uses tourism income to provide significant financial support to its National Parks system, as do Ecuador, and Costa Rica. In the case of reserves run by American Bird Conservancy and its partners, relatively few visitors can cover the modest costs of supporting a reserve of a few thousand acres. The impact of tourists on the environment can become an issue, so it is important to ensure that birding tourists have a low impact, for example by managing group size and total visitation numbers.

How many birding tourists are there?

U.S. Fish and Wildlife Service public surveys regularly show that more than 15 million Americans travel away from home each year to watch birds, spending more than $30 billion in the process. A much smaller number make long-distance and international trips, and though we do not have precise numbers for birding tourists traveling to each country, a number of specialized companies both in the U.S. and Europe service this market (e.g. Victor Emanuel Nature Tours, Sunbird, and Birdquest).

Which is the most popular birding destination?

Who has seen the most birds?

It is widely considered to be impossible to see all the world’s birds in the wild in a single lifetime. British-born birder Tom Gullick has seen 87% of them, while two more British birders, John Hornbuckle and Hugh Buck have each seen more than 84%. The top 10 all-time list is rounded out by four Americans, two more British birders, and a Canadian. The top American, Phoebe Snetsinger, passed away in 1999, having become famous for out-living a terminal cancer diagnosis by nearly two decades, and finally dying in an auto accident. Many credit her remarkable survival story to the pursuit of birds.

Which is the hardest bird see?

This is a judgment call, but among the hardest are:

· The Junin Rail, a tiny, primarily nocturnal marshbird that only lives in the dense reeds of one high-altitude Peruvian lake.

· The Long-whiskered Owlet, only seen in the wild by three people in history, despite many more having heard it at the one place it can be found in a dense Andean cloud forest.

Who are the best-known birding celebrities?

President Jimmy Carter is perhaps the most famous birder in the U.S. In the U.K., TV comedian Bill Oddie is perhaps the best-known celebrity birder. Leonardo di Caprio has been known to pick up a pair of binoculars, and Darryl Hannah has also professed an interest in birding.