One of the rarest parrots in the world, the Fuertes Parrot occupy artificial nests

This record is very important since the Fuertes Parrot is an endemic species; it is Critically Endangered and is estimated to have a population of just over 300 individuals restricted to 74 acres in the ProAves Reserves of El Mirador, Loro Coroniazul, Giles Fuertesi and Loros Andinos.

In June 2014 the occupation of an artificial nest by a couple of Fuertes Parrot (Hapalopsittaca fuertesi) was reported in one of the nests located within a small patch of forest in the El Mirador Bird Reserve.

This record becomes a promising hope for the species since the Fuertes Parrot is one of the species most endangered in Colombia, it is endemic and is currently listed as Critically Endangered (CR) according to the International Union for Conservation of Nature, due to the deterioration of their natural habitat and the consequent alarming reduction of its range. 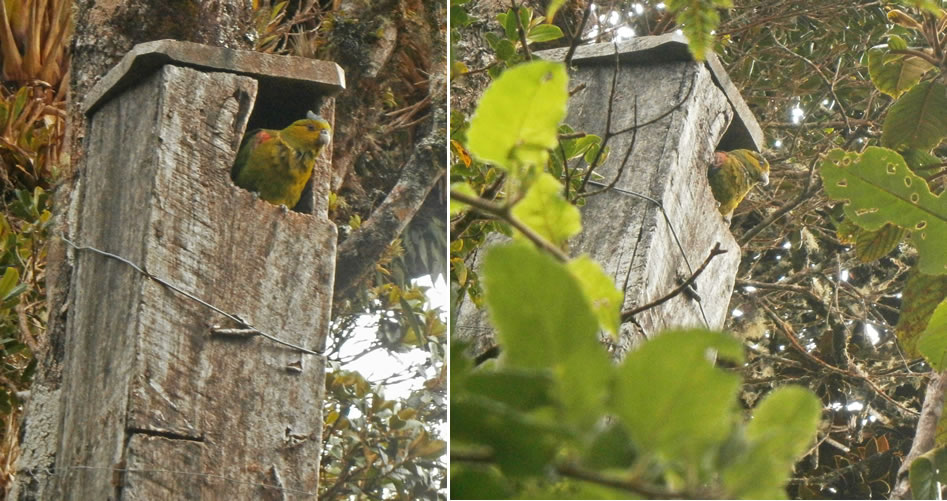 According to studies presented by ProAves it was determined that the only viable Fuertes parrot habitat is reduced to only 74 acres, in a range between 2600 and 3500 m, on both flanks of the Cordillera Central, so far only three breeding populations with a total population of approximately 300 individuals are known.

It is a gregarious species that flies in small groups; however, at the beginning of the breeding season in February, they form pairs, which remain together until hatching and post-hatching chicks to the months of June – July and January-February, after which they again form large groups. They eat a variety of seeds, fruits and flower buds of trees primarily thistle, olive and Romeron pine.

The Reserve is progressing in the artificial nests project, with about 20 nests installed in potential reproduction areas, considering which areas provide greatest availability of food and cavities as parrots nest naturally in hollow cavities in old trees like oak and encenillo, these being the main wood energy resource in the region.

Believed extinct after for over 90 years, it was rediscovered in 2002 by current CEO of ProAves, Alonso Quevedo, who, thanks to the Loro Parque Fundación and American Bird Conservancy, found a flock of 14 Fuertes Parrots confirming the survival of a species which had been last seen in 1911
In 2009, ProAves formulated the “Plan of management and conservation of Fuertes Parrot” where a strategy that serves as a guide to for prioritizing activities to be raised in order to ensure the conservation of the species. Download the document in pdf

We greatly appreciate the support provided by Loro Parque Foundation, American Bird Conservancy, the community and the City Hall of the municipality of Genova to continue saving the Fuertes parrot and its critical habitat.