Las Tangaras Bird Reserve, located in the municipality of Carmen de Atrato, Chocó, was honored to receive a 15 community members of the indigenous reserve of La Puria and El Consuelo in order to make a practical theoretical workshop on seedling production nursery.

The call was made ​​by the City Hall of Medellín, the town of Carmen de Atrato and ProAves under the Return Plan of family’s victims of forced displacement, who since 2013 have begun to return to their territories. The workshop was conducted with the objective of making enrichment with native plant species they identify as the most traditionally used to build houses and fences as well as to eat and make crafts.

The workshop, which lasted for 6 hours, was led by the ProAves conservation and environmental education team composed of Dany Quiceno and Elver Ledesma. It started with an activity of social mapping where participants drew and described the native tree species used in their communities; as a result, it was found that indigenous communities used many palms and native trees to make their homes, fences, and others like banana and peach palm trees, for food.

Then the ProAves forester explained how to build a nursery and start the plant production process. Likewise, he explained the different methods used to collect seeds from the forest and reproduce the plants in the nursery.

To finish a practice session was conducted in the two nurseries of the Tanagaras Reserve, where attendees were able to see how native tree species nurseries are produced. 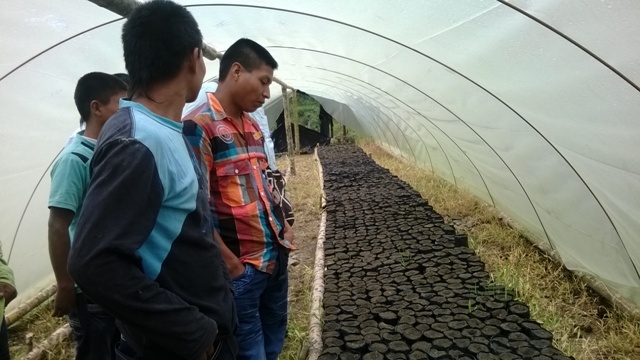 With the completion of these workshops in the town of Carmen de Atrato, in conjunction with the City Hall of Medellín – UARIV (Care and Reparation for Victims Unit) and ProAves, the local communities are expected to start producing the species most used by them in nurseries. These species have been decimated and it is now very difficult to find them in abundance from previous years so it is necessary to enrich them with species they, themselves, identify as the most traditionally used.

We appreciate the participation of the 15 leaders of the indigenous reserves; also we thank the City Hall of Carmen del Atrato and the City Hall of Medellín – UARIV for its interest in promoting this type of activity.

PrevAnteriorOne of the rarest parrots in the world, the Fuertes Parrot occupy artificial nests
SiguienteNature and Photography of unique species in the Sierra Nevada de Santa MartaNext