ProAves wanted to leave a historic legacy of research conducted in Colombia, we have documented and maintained a database so that information recorded is used by the entire scientific community to benefit the conservation of birds in Colombia.

Currently ProAves has a database that contains 270.425 entries, of which 109.937 are collected records distributed in the following way: 92.264 for the program; 12.346 historical records; 5.327 that belong to agreements and 160.488 records of specific observations. This information has been obtained through the research undertaken through projects, agreements and explorations throughout Colombia. 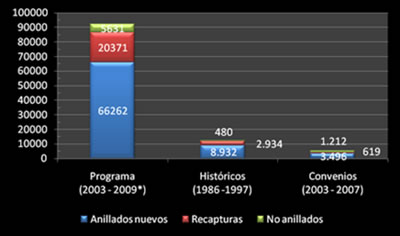 Catch Effort sampling 2003-2009 and number of individuals of species recorded by category for years.

The effort to conserve birds throughout the national territory is a major concern for ProAves who took charge of implementing the monitoring program of 116 stations in 16 locations throughout Colombia. Seven years of monitoring over the Andes Mountain Range, the massif of the Sierra Nevada de Santa Marta, the Chocó, the San Andres islands in the Colombian Caribbean and Malpelo in the Pacific Ocean as part of a strategic network for knowledge and conservation of birds, a work that has a mayor importance, now that the foundation acquired natural reserves for the conservation of the birds, focusing in them, and their influence in their areas.

Of the 88 globally threatened species by IUCN in 2004 found in Colombia, 50 species were recorded, corresponding to 57% of those listed as threatened. 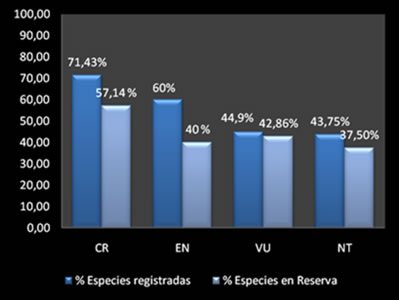 Results of the threatened species present in Data Base
PDF