During the celebration of the Ninth  Migratory Bird Festival, ProAves carried out events in the municipalities of San Vicente de Chucurí (Santander); Jardín (Antioquia); Génova (Quindío), Roncesvalles (Tolima) and Bogotá. In these the community had the opportunity to participate in several academic, cultural and recreational activities oriented towards the awareness of the importance of and threats to migratory birds, some of the most important birds that come to Colombia were showcased, with ideas of how we can contribute to their protection. 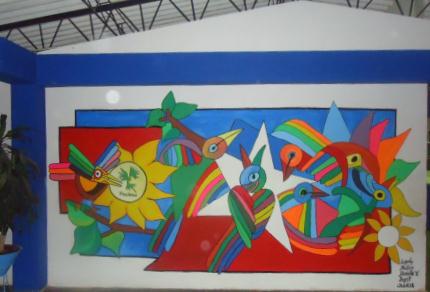 This year the epicenter  of the Festival was the municipality of San Vicente Chucurí, Santander, where several  activities and workshops in Bird Friendly Schools where  held in order to promote the children’s interest in learning about the migratory birds that come to Colombia and especially to their municipality, their importance, the major threats they face and the ways we can protect them.  In this same town, pupils of the Nuestra Señora de la Paz College painted a mural as a visible manifestation of the Ninth Migratory Bird Festival.

Meanwhile each of the cities of Jardín and Génova information and entertainment booths were set up to raise awareness of the program of activities planned for the municipalities during the Festival.

“Focus on birds” competitions were held, with prizes such as mini-guides, posters, bracelets and T-shirts, for children and adults who came to see the stands.

Observation courses for children and youths

In the town of Jardín, Antioquia, there were two observation courses, one for children and one for youths. For both initiations were made through visits to educational institutions of primary and secondary education. The objective of this activity was to promote to participants through tests of agility, speed and knowledge, an interest in migrating birds arriving in Colombia.

The closing parade was held through the main streets of the town of San Vicente de Chucurí. In the main square of the town were presented the awards for best groups based on an evaluation of their knowledge about birds; the winner was the school carnival Valentín Gonzales Rangel from Nuestra Señora de la Paz College, which received school kits, bracelets, Field guides to the Birds of Colombia and mini guides.

As a final act were two dances with the theme of migratory birds, and the launch of a song dedicated to extreme travelers called “Star Color” by singer-songwriter Jorge Luis Real.

Thanks to the participation and engagement of communities of different municipalities, the Ninth Migratory Bird Festival closed successfully, and it is clearly important to recognize that these activities have developed a real significance for people in municipalities where the festival has been celebrated continuously for nine years.

The Migratory Bird Festival IX was carried out with the support of: