The Yellow-eared parrot in National Geographic

The article was published thanks to information provided by the ProAves and the accompaniment we provided to renowned nature photographer Roland Seitre during his tour of the ProAves Reserve Loros Andinos. 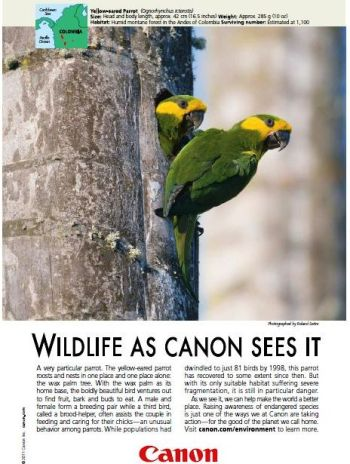 Article on the Yellow-eared Parrot published by National Geographic.

Roland Seitre’s photographs during his tour of the Fundación ProAves reserves:

In 1998, ProAves, with the support of the Fundación Loro Parque and American Bird Conservancy , initiated the Yellow-eared Parrot Project with the main objective of ensuring the survival of the species and habitat protection in the Colombian Andes.

Almost twelve years later, its population has grown from 81 individuals to over 1000; which is why the International Union for Conservation of Nature IUCN, in 2010, dropped its threat category from Critically Endangered to Endangered.

The artificial nests program is one of the more effective conservation tools, this program was created and implemented in 2003 and since then has provided new nesting sites that reflect, directly, the increase in population.

Another important effort is the preservation of the Wax Palm, Colombia’s national tree, which is also endangered because the Palm is the unique habitat of the Yellow-eared Parrot, the campaign Reconcile with Nature was institutionalized, which, with the support of the Catholic Church has been able to discourage, in large proportion, the use of the Wax Palm in celebrations of Palm Sunday.

The effort of conservation of the Yellow-eared parrot advances day by day thanks to the support of local authorities and the commitment of rural communities and environmental education projects.