YARÉ II in the I Colombian Congress of Mammalogy

The organizing committee of the I Colombian Congress of Mammalogy “a multivariate in depth look at the Colombian mammalogy,” by the Colombian Society of Mammalogy (SCMas) and the Technological University of Chocó, accepted as oral presentation, the work entitled: Project YARÉ II: Investigation of the mammals of the Serranía de los Yariguíes and their conservation by Diana Carolina Villanueva, a mammalogy researcher at YARÉ and project coordinator. 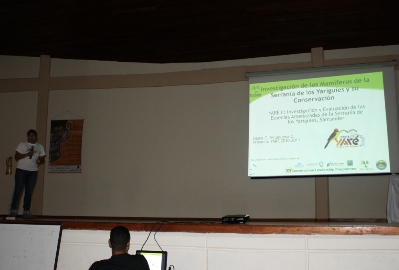 Presentation on mammal research in the Serranía de los Yariguíes in the YARÉ project, at the Colombian Congress of Mammalogy I.

The research was presented before an audience of more than 400 people from the scientific community, explaining the methodologies used and the most important results like the record of 62 species grouped in nine orders and 25 families, of which nine species are included on the IUCN list with some kind of vulnerability, nine are in Appendix III, 12 in Appendix II and six species in Appendix I according to CITES.

The study of the fauna and flora of the Serranía de los Yariguíes of the project YARÉ, provided, in the first phase, conducted in 2005-2006, key information for the establishment of protected areas; in phase two 2010-2011 conservation strategies are being developed such as creating a conservation corridor, environmental education with children from rural schools, community work in reforestation with native trees and the recovery of the Lengerke path as an ecotourism strategy. During the congress socialization of the project was also conducted with the explanation and delivery of educational material in a more personalized manner. 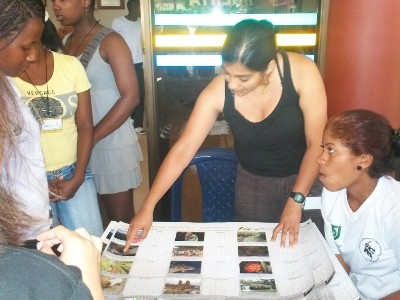 Socialization of the YARÉ Project to participants of the First Colombian Congress of Mammalogy.

The Colombian Congress of Mammalogy gave an important space to the entire scientific community interested in the study of mammals to socialize their research, receive feedback and suggestions from experts on the topic, provide key insights for the study of this group and identify the need to involve other fields of knowledge in the investigation of Colombian mammalogy. For the project YARÉ the conference was an important place to make known to the scientific community studies in mammals in the Seranía de los Yariguíes and conservation strategies that are being developed for the conservation of endangered species, as well as getting to know the interest of different students in conducting research in the Serranía from the results in the YARÉ project. 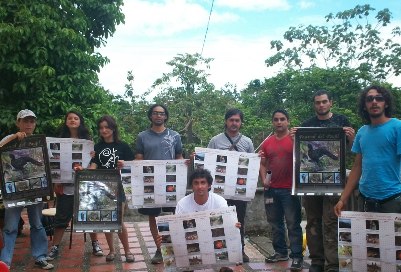 Delivery of posters to attendees of Project YARÉ II and the Festival del Paujil at the I Colombian Congress of Mammalogy.