The “Threatened Parrots Festival” hatched in 2002 with the objectives of transmitting to communities the importance of the environment and with goals to seek out conservation strategies for threatened and endemic parrots within the Municipality of Génova, Quindío, Colombia.

Starting this year, the festival will now be known as the “Fuertes’s Parrot Festival” thanks to the agreement establishing the parrot as the Municipality of Génova, Quindío, symbol for the environment, during “Culture Week” when traditional activities are celebrated.

Throughout the month of October, educational and leisure activities revolving around environmental issues will be developed allowing the integration and participation of the community. A specific emphasis will be placed on threatened and endemic species which share their habitat with the Fuertes’s Parrot. 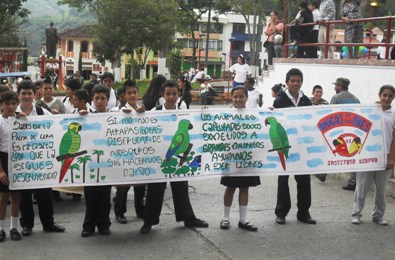 October 4, main day of the festival.

Each participant will have a mask representing a species living near the city of Génova. In this parade, different groups representing the cultural events developed by the municipality, will aim to encourage young people to participate in the festival. Prizes will be awarded for the best two masks.

“INTERPRETATION OF THE LAND, THE CULTURE AND THE GENOVÉS ENVIRONMENT”: 2:30 to 5:00 pm

During this part of the festival, children, youth and adults will be involved and teams of five contestants will visit five stations (in a predetermined order by the organizing committee) and complete (as a team) every puzzle and exercise located in each unique station.

NIGHT OF MYTHS AND LEGENDS:

Dim lights, dead leaves, a palms imperceptible movement, breathing quickens. Something dwells between the seats, behind the trees, under the sinks, something that is part human, part natural, sometimes in the present, but mostly in the past. Myths and legends invade on the night of October 4, 2011. The so called PATASOLA, THE HOJARASQUERO, La Llorona, the Madremonte, occupy the bodies of children and youth as Genovese’s race to live another day in the memories of Colombians.