A new hope for the world’s most poisonous frog

Located to the western side of the department of Cauca, on the banks of the imposing Timbiquí River, stands one of the most important areas on the Pacific Coast for the conservation of nature. There lies the Ranita Terribilis ProAves Reserve; established in 2008 by the Fundación ProAves to protect populations of the world’s most poisonous amphibian, Phyllobates terribilis. 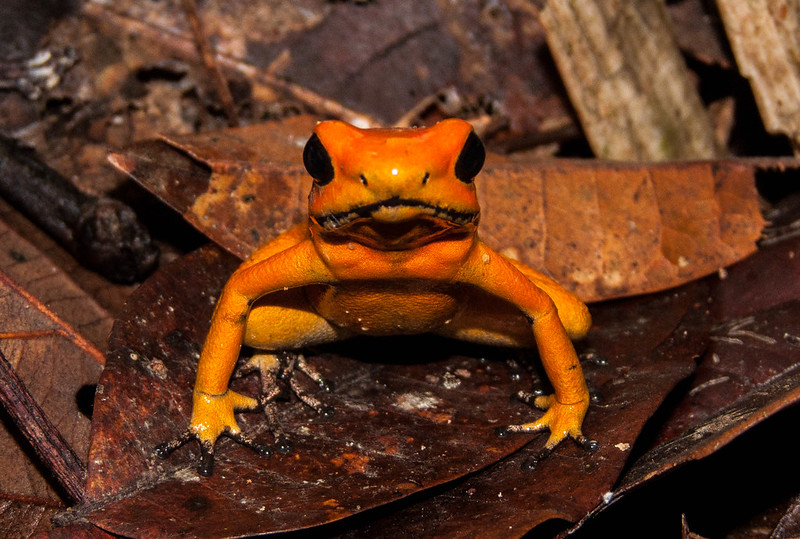 The Golden Poison Dart Frog (La Rana Kokoi in Spanish), named after the ancestral people Eperara Siapidara, is a species of amphibian belonging to the Dendrobatidae family. There are several species of poisonous and endemic frogs in this family, from Central and South America, that are called poison dart frogs. This name comes from the fact that indigenous tribes used to smear the tips of their arrows on the back of the frog before hunting animals.

The distribution of the Golden Poison Dart Frog, considered an endemic species of Colombia, is restricted only to the department of Cauca. But the Dendrobatidae family, to which this amphibian belongs, is present in the entire biogeographic region of Chocó, from the department of Chocó in Colombia, to the province of Manabí in Ecuador.

Within the large family of Dendrobatids, La Rana Kokoi is relatively large, with adult individuals reaching between 5 and 5.5 centimeters. The entire group of poisonous frogs stands out, mainly, for different aposematic coloration patterns on the skin, a type of pigmentation that is usually related to the toxicity of the animal and functions as a warning sign against potential predators. Despite their name, not all Golden Poison Dart Frogs are golden; there are three different color morphs in the region.

PROTECTING THE HOME OF THE MOST POISONOUS AMPHIBIAN ON THE PLANET

The Ranita Terribilis ProAves Reserve is home to 2 of the 3 morphs present in the region. Empty coconut covers have been installed in the protected area for several years, with the purpose of being used by the frogs to deposit their young, helping the reproduction of the species; That is why one of the most important tasks of our team within the Nature Reserve is the daily monitoring of the population of Phyllobates terribilis.

The Golden Poison Dart Frog is listed as an endangered species, according to the IUCN red list, despite having a powerful defense system against predators. The survival of this amphibian is mainly threatened by human interference in its habitat due to hunting, capture and deforestation. Illegal wildlife trafficking in many places has caused enormous damage to populations leading to extinction.

THE HABITAT OF ONE OF THE DEADLIEST ANIMALS IN THE WORLD

In their natural habitat, these frogs are diurnal, they tend to look for food mainly in the morning and early afternoon. It is a carnivorous animal, whose diet consists of insects, mainly ants of the Brachymyrmex and Paratrechina families. Although they also catch crickets, caterpillars, flies, cockroaches, and beetles, among other insects.

Currently, many specialists assume that the very high toxicity of the Golden Poison Dart Frog is due to the high consumption of a small species of beetle, which in addition to producing formic acid, would also be capable of synthesizing Batrachotoxin. It is believe that the presence of this chemical in the frog’s diet contributes to their toxicity.

However, this hypothesis has not yet been confirmed. Within the same protected area, one of the ants most feared by the locals stands out, it is the Paraponera clavata, known locally as Konga. The pain from the sting of this insect is said to be greater than that of any other Hymenoptera and is classified as the most painful, according to the Schmidt index of pain by sting. It is possible that La Rana Kokoi includes this type of ants in its diet, making it the most poisonous amphibian on the planet.  It’s so venous that the venom of a single frog would be enough to kill 10 people.

We thank the World Land Trust (WLT) and the American Bird Conservancy (ABC) for helping us protect and conserve the world’s most poisonous amphibian, Phyllobates terribilis.