In the expeditions carried out in the El Pangán ProAves Reserve, our field team was able to register a new species of amphibian, Pristimantis ornatissimus, for the first time in Colombia. For many years, this species was considered endemic to Ecuador. 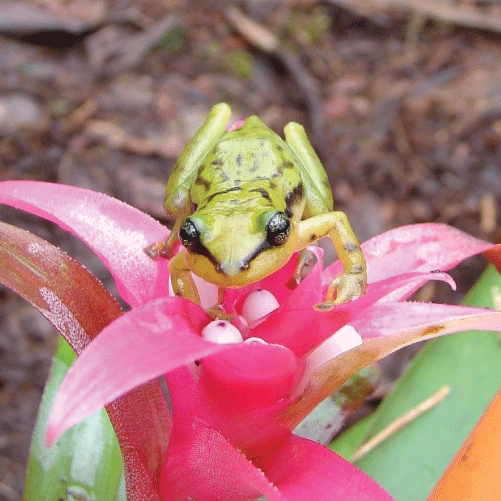 The El Pangán ProAves Reserve is located in the foothills of the Pacific Slope of the Western Andes range, in the municipality of Barbacoas (Nariño Department). This protected area is located within the biogeographic region of Chocó, one of the areas with the highest amount of endemism on the continent. This makes the Nature Reserve a “Biodiversity Hotspot” and one of only 25 regions of the world classified as priority for nature conservation.

The area where the Nature Reserve is located has an extraordinary biodiversity, making it a hotspot for the identification of new species. In this region, deputy director of the ProAves Southwest Region, Juan Carlos Luna, was able to confirm the presence of Pristimantis ornatissimus, considered endemic to Ecuador for many years.

The first record occurred in 2003, during the Migratory Bird Monitoring project of Fundación ProAves in the El Pangán. In April 2021, a second individual was registered at an elevation of 1,450 meters above sea level, in the upper part of the same Nature Reserve.

The finding of this species constitutes the first documented record for Colombia, showing that the species is expanding its range. Pristimantis ornatissimus is known to prefer well-preserved forests and, in both observations, the species was recorded in association with Heliconias, 60 centimeters above the ground.

The original distribution of this species in Ecuador is in the northwestern foothills of the Andes Mountains, with additional records in the provinces of Esmeraldas, Pichincha, Santo Domingo de los Tsáchilas, Cotopaxi and Carchi. This new registry in Colombia, in the Municipality of Barbacoas (Nariño Department), constitutes the first documented report for the country. These findings confirm the species has expanded its distribution range by several kilometers into the southwest region of Colombia.

This species is an anuran of the Strabomantidae family. Currently, this species is known to inhabit the tropical humid forests of Chocó, as well as western piedmont forest in its original Ecuadorian range. The coloration of this organism varies across its lifespan, from green to yellow on the dorsal surface. The back has longitudinal lines with black spots. Their feet may have an orange hue, and their belly is yellow or pale green. The iris can be yellow or gold with black crosslinks. It is known to inhabit primary and secondary forest.

Pristimantis ornatissimus is considered a rare species and its populations are currently declining, with its greatest threats being livestock, cropland expansion, agricultural pollution and road construction. These factors contribute to the species’ listing as Vulnerable (VU) on the IUCN Red List. Currently, habitat within its Ecuadorian range of distribution is highly fragmented.

The presence of this beautiful species within the El Pangán ProAves Reserve reaffirms our never-ending commitment to the protection and conservation of this majestic ecosystem and its species.