Climate change is expected to cause shifts in species distributions worldwide, threatening their viability due to range reductions and altering their representation in protected areas. Biodiversity hotspots might be particularly vulnerable to climate change because they hold large numbers of species with small ranges which could contract even further as species track their optimal habitat.

Using field data shared by ProAves, together with publically accessible data from BioMap data containing 230,000 records of Colombia bird specimens, together with field data compiled by Dataves, eBird, and xeno-canto, the extent to which climate change could cause distribution shifts in threatened and range-restricted birds in Colombia was analyzed. The online Darwin Database by Project BioMap was a collaboration of over 70 bird collections across the world, and lead by The Natural History Museum (UK), Instituto de Ciencias Naturales de la Universidad Nacional de Colombia, and Conservación Internacional-Colombia. 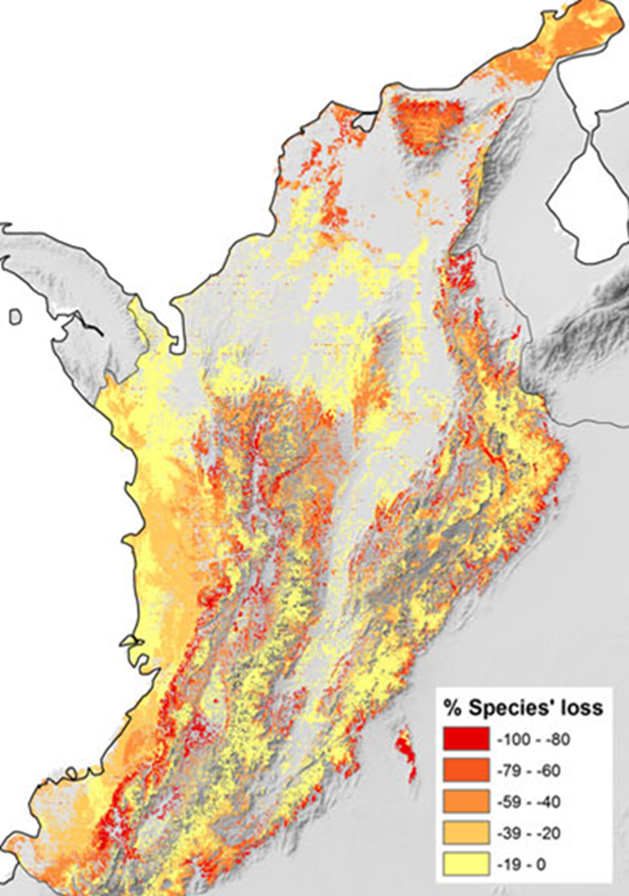 Results highlighted that threatened and range-restricted birds in Colombia are projected to lose on average between 33 and 43 % of their total range under future climate, and up to 9 Colombian endemic species may lose their climatically suitable range completely and therefore could go extinct. Worryingly, 8 of the 9 species that could go extinct are endemic to the Sierra Nevada de Santa Marta and represent almost half of all the endemic bird species restricted to the Sierra Nevada de Santa Marta, including the spectacular Santa Marta Parakeet Pyrrhura viridicata.  An important population stronghold for many of the eight Santa Marta endemics is in the El Dorado Bird Reserve, but this 2,500 acre reserve is inadequate to sustain populations and greater efforts are needed to connect this reserve and the San Lorenzo ridge to the main National Park some 5 km away – which holds higher elevations that could temporarily buffer the impacts of climate change.

Furthermore, one of those species at risk of extinction from the effects of climate change is the Endangered Chestnut-capped Piha Lipaugus weberi from the northern slopes of the Central Cordillera – with the core surviving population contained within the ProAves reserve “Arrierito Antioqueño Bird Reserve”.

The article predicted that in the future, potentially between 5 to 70% of threatened and range-restricted birds in Colombia will be inadequately represented is protected areas.

This article provides recommendations for future research and conservation needs in Colombia, including:

(1) monitoring populations of birds for which future suitable climate is predicted to completely disappear;

(3) including predictions of the effect of climate change on species distribution as part of IUCN assessments of species extinction risk, and

It is critical that existing reserves, parks and other protected areas be better protected and expanded, while new protected areas be established in the most under-represented regions and ecosystems, particularly the Sierra Nevada de Santa Marta, the Chocó, northern slope of the Western and Central Andes and the northern half of the Eastern Cordillera.

Overall, the article lays an important foundation for scaling up conservation efforts in the race to combat the effects of climate change on Colombian birds.