Migratory bird populations across the planet are in free-fall. They are the “Canary in the coal mine” – evidence to a rapidly changing planet that disrupts their ancient flyways and life cycles that have evolved over millions of years. Rapid habitat loss on the wintering and breeding grounds, new obstacles like cell towers, and extreme weather conditions throughout the year threaten this once prosperous group of birds that include all groups of birds, from raptors to hummingbirds, warblers to shorebirds.

In the America’s, the majority of North America’s spectacular bird life heads south in the fall and reside in Latin America for often over six months of the year. ProAves work on this important and sensitive group of birds has highlighted that Colombia is a critical non-breeding area for many of North America’s most endangered migrants. Furthermore, rapid habitat loss across the most important non-breeding areas, such as subtropical and montane forests, has almost certainly contributed to a significant decline in the populations of Neortopical migrants. 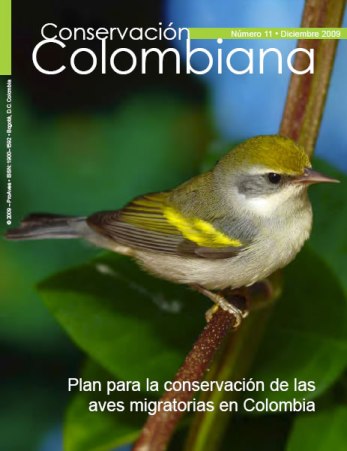 In 2003, ProAves initiated the National Migratory Bird Monitoring and Conservation Program, thanks to funding from the Neotropical Migratory Bird Conservation Act (NMBCA) by U.S. fish and Wildlife, Conservación Internacional-Colombia, The Wetland Trust, American Bird Conservancy and BirdLife International, among others. Since then, ProAves has made a compilation of information on all migratory birds in Colombia, through literature review, consultation of historical observation and specimen databases, monitoring at over twenty-eight sites in Colombia, and exchange of information with experts worldwide.

The Colombian Migratory Bird Conservation Plan is the result of three years of analysis completed by ProAves to provide the first comprehensive assessment as to the state of terrestrial Neotropical migratory birds on their non-breeding range in Colombia. Analysis highlights those species at greatest conservation concern and identifies priority areas for migratory birds in Colombia. This has allowed us to formulate a long-term conservation plan that was assessed and improved by experts and authorities at a workshop held in Bogota in 2009. The resulting National Migratory Bird Conservation Plan, published in the 11th journal of Conservación Colombiana , establishes priorities for the most efficient allocation of economic resources and efforts to save migratory birds in Colombia.

1. Prioritization of migratory birds that breed in North America and reside in Colombia during the non-breeding season, based on a review of action plans and priority lists in North America.

3. A comprehensive migratory bird Conservation Plan that brings together actions for all species.

4. A regional analysis that identifies and targets areas for conservation for priority species, accompanied by a review of threats, conservation actions in each area and new initiatives.

This information is intended for scientists, academics, conservationists and government representatives responsible for managing the natural resources so that collectively they can consider actions and funding based on the proposed objectives. The Plan contributes to the initiative of the PIF (Partners In Flight), the Ministry of Enviroment of Colombia, and the Convention on biological Diversity and the Western Hemisphere Migratory Species Iniciative

It is up to all of us to make a difference and save the wonderful spectacle of migratory birds for future generations.

The 11th Conservación Colombiana journal as a PDF here.