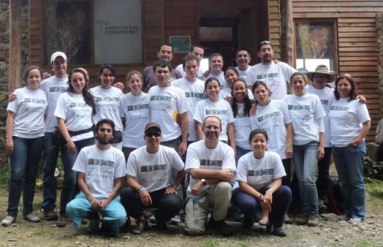 It successfully developed the workshop “Work Desk – National Action Plan for the conservation of threatened parrots of Colombia 2010 – 2020”. In that Governmental and non-governmental organizations that have collaborated with the Program ProAves Threatened Parrots attended in addition to ornithologists, conservationists and people from local communities and other entities with the foundation or who have not developed an action plan framed within the 2002 – 2007 plan or independently that are involved in research and conservation of the Parrots of the country. There were 23 people and 11 institutions in all.

The objectives of the workshop sought to evaluate the scope of the results raised during the first plan and the appropriateness of the current framework to develop new guidelines and ensure the permanence of populations of threatened parrots, based on the progress of the conservation status of each species.

During the discussions the current state of knowledge on natural history for the threatened parrot species from Colombia was outlined, threats to national and local level were identified and assessed, the current conservation status was identified, actions were proposed and undertaken, and the conservation needs of each, finally, the relevance of the guidelines established in the plan 2002 – 2007 were evaluated and recommended in the plan 2010 – 2020, to propose alternatives consistent with the current state of conservation of the species.

One of the points satisfying the workshop shows that the most critical species (ie Indigo-winged Parrot, Yellow-eared Parrot and Pyrrhura viridicata) are those with the most complete scientific information and with the greatest number of conservation activities, an increase in populations of Ognorhynchus Parrot and a successful use of artificial nests by Hapalopsittaca fuertesi has been documented.The needs of these parrots in terms of research should focus on population studies, ecological and genetic detail.

Our findings show the clear presence of a group of species whose situation is alarming, as well as presenting distributions and small populations or strong pressure at different spatial scales, ignorance about their biology and ecology worse they are: A. ambiguus, P. subandina, P. caeruleiceps, P. peaceful and Touit stictopterus.