From 1st to 6th March the first version of the technical workshop of population monitoring and management of artificial nests for High Andean parrots of Colombia was held in Roncesvalles, Tolima, with the aim of empowering the community where ProAves, with support from Loro Parque Foundation, has developed the program Threatened Parrots. The workshop lectures were on the monitoring and installation of artificial nests, population monitoring techniques, reproductive aspects, handling and management of chicks, basic treatment information and techniques of climbing palms and trees. The objective of the workshop was to provide participants the basic tools to take ownership of the project and become those conducting the monitoring in the future.

The workshop was attended by 20 people from different parts of the country where the project with threatened parrots is being developed: Roncesvalles, Tolima; Jardín and Urrao, Antioquia; Barbacoas, Nariño; Genova, Quindio; Santa Marta, Magdalena and Ocaña, Norte de Santander, we also count on the participation of two postgraduate students who will begin their undergraduate work this year with the Santa Marta Parakeet (Pyrrhura viridicata) in RNA El Dorado. 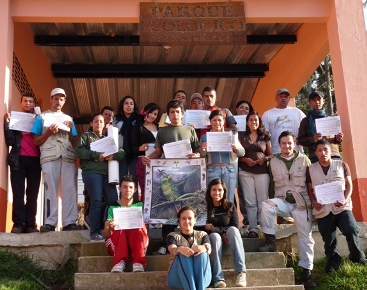 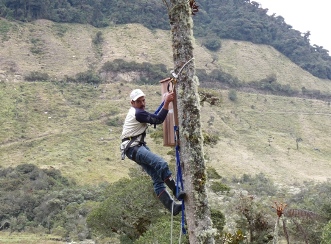 Finally we strengthened the commitment of the participants to continue the monitoring process, trying this way that the community maintains continuity in the conservation of species in their natural habitats.