Serranía de San Lucas is an isolated 110 km massif in northern Colombia that rises to 7,500 feet (2,300 m) and covered by lush tropical rainforests. Incredibly, this spectacular massif is biologically unknown, bar a brief exploration by ProAves researchers during 1999 to 2001 at the lower elevations of 700 to 4,500 feet (200-1,400 m). This survey registered over 370 bird species including 11 endangered species plus a high concentration of endangered mammals, such as the rare Spectacled Bear and five species of primates. These preliminary results highlighted the global importance of the Serranía de San Lucas for biodiversity and led to the conclusion that there likely to be many species of flora and fauna unknown to science at higher elevations. As a result of the threatened species found during these studies, the region was declared as globally important for conservation: an Important Bird Area (IBA) in 2005.

Biologically, the Serranía de San Lucas remains the least known and most interesting area in the Western Hemisphere, a massif that potentially holds an entire community of flora and fauna unknown to science. During the 1999-2001 expedition, various new frog species for science and several new bird taxa were found, which still await description.

The “Teta” peak of the Serrania de San Lucas, an massif standing over 7,500 feet high and completely isolated from the three Cordilleras of Colombia, is the latest major frontier for biologists in Colombia and perhaps the Western hemisphere, but will be destroyed within just a few years.

Unfortunately, the San Lucas massif is facing an unimaginable environmental crisis, a victim of its own wealth of huge gold and timber resources. Until recent years, natural resource extraction on the massif has been largely artisanal owing to decades of political instability.

Despite the importance for biodiversity and in flagrant disregard for environmental impact studies, has granted mining concessions to large multinational gold mining companies as Anglo Gold Ashanti of South Africa among others. These companies already have claimed rights to destroy almost the entire area of Serranía de San Lucas (see gold mining concession maps below) with hydraulic and hardrock mining activities. 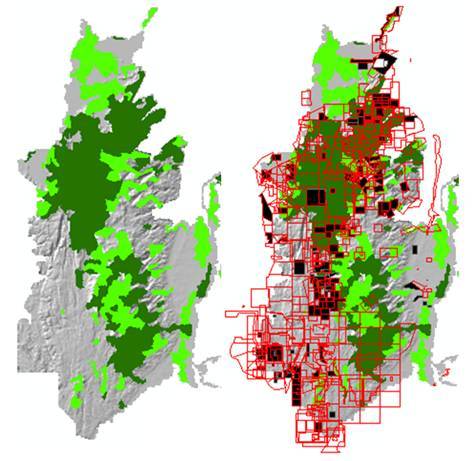 To hand over the Serranía de San Lucas to mining companies is not only irresponsible but represents a potential catastrophe to Colombia and the planet. Serranía de san Lucas is a biodiversity treasure that Colombia and the world should be proud of. Unfortunately, none of the mining companies support the protection of biodiversity and sadly, not a single hectare of the San Lucas massif is protected for biodiversity conservation. Of 2.5 million acres of original forest cover on the massif, only 10% survives and that is estimated to largely be destroyed and fragmented in just eight years. The consequences of losing 2.5 million acres of forest beside the Colombia’s most important river – the Rio Magdalena, together with heavy land degradation, are incalculable. For examples, as extreme weather events become ever more frequent, the situation for millions of people living within the Rio Magdalena valley flood area will be dire.

Absurdly, after the government had handed over Serranía de San Lucas to mining companies, a workshop was held on July 31 2009 in the city of Cartagena to establish Biodiversity Conservation Priorities for the Serranía de San Lucas, framed within the theme of Planning and Sustainable Development.The workshop was led by the Ministry of Environment, Housing and Territorial Development, The Nature Conservancy (TNC) and World Wildlife Fund (WWF). Experts in biological groups, such as the Alexander von Humboldt and Ecohabitat Foundation, among others were present with ProAves. All experts agreed on the biological and environmental importance of the San Lucas massif.

Two conclusions of the workshop included an acknowledgement of a tremendous void of biological information and the imminent concern about the lack of a national or private protected area.

Unfortunately, the Colombian government does not agree on the establishment of an effective protected area for the region, preferring a “Forest Reserve” that permits mining of the entire area.

In conclusion, the Serranía de San Lucas with its unique biodiversity and ecosystem function for Colombia and the planet is at extreme risk of extinction within a decade.

See the EBA report published by ProAves about the biodiversity of Serranía de San Lucas.