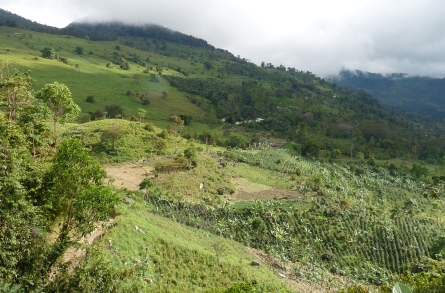 The Cerulean Warbler Corridor was designed and established in 2008 in the town of San Vicente de Chucuri to join the Cerulean Warbler Bird Reserve located in the Serranía de los Yariguíes on the western slopes of the Cordillera Occidental in Colombia in the department of Santander, it has 209 hectares of high Andean forest and is surrounded by pasture, coffee and cocoa crops and the Helmeted Curassow Bird Reserve located at Cerro de la paz on the eastern slopes of the Andes in the towns of San Vicente de Betulia and Chucurí (Santander).

It has more than 1,500 acres between about 650 and 1,400 m in altitude, although its average altitude is between 800 and 900 m, of which approximately 90% is tropical rain forest. 10% of the area has coffee, cacao plantations (small scale) and pastures.

The corridor was established to allow the passage of migratory species Dendroica cerulea and Vermivora crisoptera, and in general, all migratory and native species joining the Natural Bird Reserves of Reinita Cielo Azul and Pauxi Pauxi, which are located between café and cocoa plantations and are frequently visited by migratory species, and to create community awareness about the importance of conserving natural areas on their farms.

This initiative was established with support from American Bird Conservancy, Robert Giles and NMBCA who led the establishment of the reserves and the corridor which is 10 km long and 1 km wide with an altitudinal limit of 800 to 2,000 m through three production systems (coffee, cocoa and livestock). Within the corridor several conservation strategies such as reforestation focused on coffee and cocoa under native shade, establishment of Silvopastoral systems promoting connectivity between the lands. To this end, we have established three nurseries distributed within the corridor and the development of Ecological Easements.

At the end of 2010, the corridor was extended to the Natural Bird Reserve Cucarachero de Chicamocha in the town of Zapatoca (Santander) to the project YARÉ with support from Conservation Leadership Programme, which aims to recreate the path of Lenguerke and through this, join the corridor thus conserving the dry forest ecosystem and endangered bird species in this place.