Two weeks ago the ProAves conservation team in the Pangán Bird Reserve on the Pacific slope of Nariño found the Rio Ñambí, that flows through the reserve, to be contaminated by a major crude oil spill.

“The spectacular Ñambí river is becoming a sewer of black water, with thousands of death fish and cover riverside vegetation”, Sara Inés Lara, Executive Director of Fundación ProAves, complained. “It a catastrophe for this forest and for this planet”. The oil spill is not due to accident but by the illegal extraction of oil from a major oil pipeline owned and operated by EcoPetrol.” The oil pipeline starts in Putumayo in the Amazon and flows past the reserve and town of Junín and on to the coastal port of Tumaco. Unfortunately, thieves have drilled into the massive pipeline to extract oil.

Two images of the same spot on Ñambí River before (left) and after the oil spill (note that oil contaminated a significant are of riverside vegetation).

Thieves process the oil to produce homemade gasoline which is used in the processing of coca leaves into cocaine. The side products from the artisanal distillation of crude oil, plus the overflow of crude oil all flow into streams then the Rio Ñambí. It is estimated that perhaps more than one hundred thousand gallons of oil have flowed into rivers, causing irreparable damage and death to the fauna and flora of the region.

Orchids and other plants dying in the Ñambí river contaminated by oil.

“The illegal and extremely dangerous extraction of oil have just started” said the President of Fundación ProAves, Alonso Quevedo. “The Chocó rainforests of Colombia are recognized as some of the richest in biodiversity and endemic species in the world with enormous value not only for nature but also for Awá indigenous communities who depend on this area.”

Oil along the Ñambí river (left) and the pipeline passing by the reserve (right).

Unfortunately, there are serious threats to the environment in this region such as illegal logging, illegal crops, cultivation of African palm, and now the looting of oil. UNIPA and CAMAWARI indigenous reserves, besides the El Pangán Bird Reserve are experiencing a crisis that affects not only the ecological balance of the region but also the communities themselves. 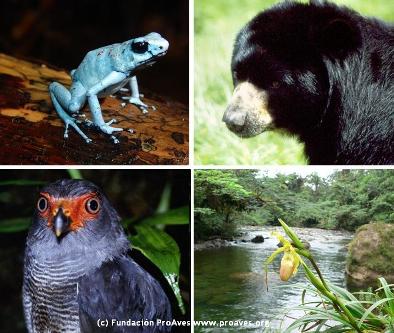 “For sure, this not only affects the wildlife but also families who derive their livelihood from these rivers,” said Sara Inés Lara. “This silent death of a once pristine river, may take a decade or more to recover.”

Dramatic scenes from the Gualmanbí creek affected by oil.

Ecopetrol and all other authorities have been informed of the critical situation. ProAves is urgently seeking support to train and hire local people that were once loggers and hunters as “forest guardians” to help protect the areas amazing natural heritage, especially monitoring the pipeline. If you are interested to help support this program, please contact us immediately at fundacion@proaves.org