The National Programme for the Monitoring and Preservation of Migratory Birds is a ProAves Foundation initiative carried out with the cooperation of Preservation International so as to monitor and preserve endangered neotropical migrant birds with the help of the 27 monitoring stations existing in Colombia.

Nearly 183 neotropical migrants arrive each year in Colombia and from here they spread throughout the South American continent. Unfortunately, the critical areas and habitats on which they depend are threatened due to their over-exploitation or destruction. ProAves Foundation and Preservation International launched in 2003 the Colombian Monitoring and Preservation Programme for Migratory Birds, a pioneer initiative in Latin America

This programme seeks to consolidate a strategic network for bird monitoring, to raise awareness of the importance of preserving these species and their natural habitats in Colombia and to increase the national capacity to undertake studies and preservation actions regarding migratory birds and their habitats.

The main achievements upon completion of Phase II of the programme in July 2007 were:

Protection and management of bird populations

· First protected area for the preservation of migratory birds in Latin America. Establishment and expansion of the Reinita Cielo Azul Bird Reserve. The protected area includes oak and shadowy coffee forests, ideal habitat for the main species of the reserve, the Cerulean Warbler (Dendroica cerulea).

· Bird Information System online.A database with 260,000 entries of data resulting from the monitoring process and that follow national and international standards so as to facilitate the exchanges of information. MySQL on-line platform. There is a record of about 57% of the total number of birds, 75% of land migratory birds, 64% of the endemic birds and near-endemic and 44% of threatened birds in Colombia (54% critically endangered, 48% endangered and 40% vulnerable).

Maintenance, management, protection and restoration of the habitat for neotropical migratory birds

· Migratory Bird Action Plan implemented in Colombia. 95 species of migratory birds and 82 endangered species. 53.5% of the 155 species in this category for Colombia are preserved in 12,660 acres under protection agreements signed for critical areas. These protection agreements have been approved with the help of the Colombian Network of Civil Society Reserves (CNCSR) and ProAves Foundation:

Ecological Restoration. Creation of nurseries in the Orejiamarillo Parrot Bird Reserve with an annual production of 10,000 young plant productions. Project for forestry and grazing techniques implemented in the Reserves of the Civil Society. Implementation of the work plan for the ecologic easement in Antioquia, 2005. 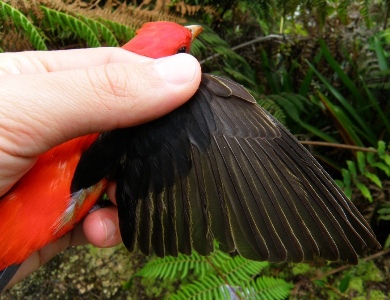 · Consolidation of a strategic network for bird monitoring. 27 banding stations in operation since November 2003 spread throughout four of the five regions of Colombia: Andean, Caribbean, Pacific and Amazonia.199 people linked to the program, 37 banders, 105 field assistants and 57 local volunteers.

Strengthening of a Banding system in Colombia. Construction of the foundations for the implementation of a national banding system. 12.355 banding historical data collected, 9000 bands distributed to 31 projects belonging to 22 organizations or individuals. Existing Website for Banding.

Capacity building for monitoring and banding.402 researchers, students, and amateur ornithologists across Colombia trained in bird monitoring techniques, in 9 classes in 6 different locations throughout the country with 39 instructors recognized both nationally and internationally:

1.National and International acknowledgement as an organization that offers regular ornithology courses at different levels.

2. Training of skilled people in banding.

a) Coordination in the Western Hemisphere of the Banding Network.

b) Initiative of the Western Hemisphere for Migratory Bird Species.

Cerulean Group. Participation and support of the activities of the group Cerúleo. Support for the postulation of the Cerulean Warbler in the list of threatened species of the United States.

Alianza Alas Doradas. Coordination of the research and preservation working group for the Reinita Alidorada in non-reproductive areas.

a) Website with information and interactive games especially designed for Bird-Friendly children.