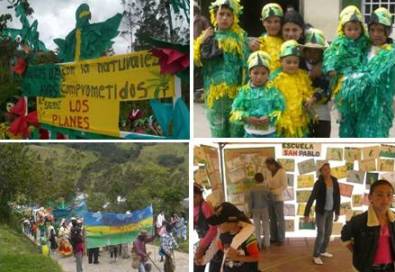 Thanks to the efforts of the environmental teachers all over the country, each year in July, we organize the Parrot Festival with the aim to share knowledge, defense and protection to all endangered species of parrots in Colombia, among those endangered species we can find the Yellow-eared Parrot (Ognorhynchus icterotis), and the Indigo-winged Parrot (Hapalopsittaca fuertesi), found in the Andean forest of Tolima, Antioquia and Quindío.

The main objective is to adapt into the community an identity based in the pride generated by the presence of these unique and endangered birds in their land, spreading this activity alongside our country, allowing local and regional integration in the strengthening of the natural and cultural heritage.
Tolima

From 17 to 20 July 2009, it was celebrated in Roncesvalles, Tolima, the IV Yellow-eared Parrot and the Wax Palm tree Festival. Leaded by ProAves and with the kind support of the Municipal Mayoralty of Roncesvalles.

Wax Palm trees, Parrots, princesses, witches, old men, chicks, characters from Roncesvalles, folk dances, the municipal orchestra and procession cars, teachers, students, parents and the entire community worked hard in order to make this event a great success. Youngsters and kids enjoyed the most the event, dancing and parading at the beat of the music, sharing their energy and happiness with the entire public.

Comparsas, cultural presentations, games, drawing and short story contests, and a bird Yellow-eared Parrot watching expedition were some of the activities carried out, achieving participation of 90% of the educational institutions of the region, the linkage among the entities committed in the preservation of the Wax Palm tree and the Yellow-eared Parrot, the intervention of different cities and the recognition of the importance of this event in other areas of the national territory www.roncesvalles-tolima.gov.co

The festival was from 28 to 30 July, and its main objective was to celebrate 10 years of the “Yellow-eared Parrot Project”, sharing with the community the achievements of this project.

During three days educational, cultural and dynamic activities were carried out counting with the participation of the community. One of the main activities was the Launching Parade, were more than 500 people walked in the main streets of the city, reaching the Main Park were the opening of the festival was celebrated.

This event had the special collaboration of the students and the teachers of the 16 Friends of the Birds schools, the Ecological Group Friends of the Birds, Young researchers and the Social Service group. Kids of each school and their teachers participated in the activity wearing masks and disguises of the Yellow-eared Parrot exhibiting banners allusive to its conservation and with congratulations to ProAves for ten years of hard work. www.eljardin-antioquia.gov.co

The festival ended with a big cultural parade with the participation of the entire community, school groups, the Ecological Group Friends of the birds, Chicks, Picardia y Angelitos, Young Researchers, youngsters providing social service at ProAves and the youth group Little Giants of the ICBF. The closure activities of this festival were the contest for the best representation of the Indigo-winged Parrot, and a contest of short stories and poetry.

Presents and prizes for the participants of the event were given with the support of the Mayoralty and the Corporación Autónoma Regional del Quindío (CRQ) www.genova-quindio.gov.co

Parade at the Municipality of Genova, participating schools and the Ecological Group Friends of the Birds.