A new subspecies of antpitta – a thrush-sized ground-living bird – from near the Colombian city of Medellin has been discovered among the one million bird specimens at the Natural History Museum in London, after lying undiscovered in the collection for 120 years. Now it is probably extinct. The new bird, called Giles’s Antpitta (Grallaria milleri gilesi), was collected in September 1878 by the British ornithologist Thomas Knight Salmon, when he made his last collection of bird skins from the forested hills surrounding the city of Medellin before his abrupt death. 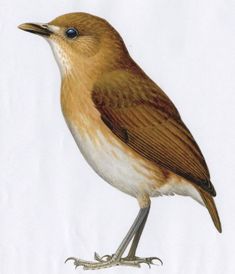 “There were no bird identification guides in the late nineteenth century so Thomas Salmon sent the specimens he’d collected to be identified by scientists in Britain, where many were deposited at the world’s largest bird collection here at London’s Natural History Museum,” explained the Museum’s head of bird group Dr Robert Prŷs-Jones. “While there were many new and exciting discoveries, one unusual specimen of an antpitta was amazingly overlooked.” 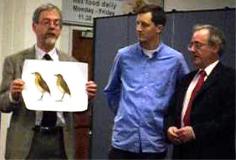 The new antpitta lay unrecognised in the Museum’s collection until 2001, when bird artist Norman Arlott uncovered the specimen. He drew it to the attention of both Robert Prŷs-Jones and Natural History Museum scientific associate Dr Paul Salaman.

“We immediately recognized the specimen was previously undescribed” exclaimed Dr Paul Salaman, “yet it seems inconceivable that this distinctive specimen could have had been overlooked for 130 years.”

Thomas Knight Salmon collected the bird in the Andean mountains at Santa Elena, a neighbouring town to Colombia’s third largest city, Medellin. Formerly forested, with their cool climate and rich soils these are prime locations for coffee cultivation, agriculture and cattle grazing. Very little of the original lush Andean forests remain and the region has very few protected areas. Several recent searches by Fundación ProAves fieldworkers in the region have failed to locate any living individuals.

“Sadly, the new subspecies appears to have been restricted to Andean forests” said Dr Prŷs-Jones “a habitat that has been almost completely destroyed around Medellin and replaced by non-native pine trees and exotic eucalyptus trees.”

“If we had known about this extraordinary specimen decades before, it is possible the bird could have been located and saved, but sadly it lay overlooked for generations and as a bitter consequence we have probably lost it forever,” concluded Dr Salaman.

Colombia’s national bird conservation organization, Fundación ProAves, has received extensive support from British conservation philanthropist and keen birder, Robert Giles, who has supported the protection of many threatened bird species in Colombia. The new bird has been named in his honor.

The description of the new bird is published in the March 2009 issue of Bulletin of the British Ornithologist’s Club, by three Fundación ProAves Council members – Robert Prŷs-Jones, Thomas Donegan, and Paul Salaman.