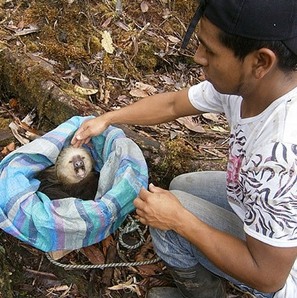 Tree dwelling sloths in the rainforests of Central and South America have very few natural predators; blending into the trees in the forest canopy and moving very slowly, they do not attract attention. Only when they come down to ground level do they become vulnerable.

Sloths prefer to spend most of their time in the canopy and are rather ungainly when forced to move around on ground but as their natural habitat becomes fragmented through deforestation, in many places they are forced to come to ground level. This recently happened near the El Pangan nature reserve created in 2009 by conservation organization Fundación ProAves (a WLT partner), to help protect the threatened Chocó rainforests of southern Colombia.

As sloths come to clearings in their once dense forest, they are forced to climb down from the safety of the treetops and struggle across open ground. Here, they are exposed to their main predators; the Jaguar, the Harpy Eagle, and humans.

Sloths find it very difficult to move across the floor, so frequently get disoriented and stumble into populated areas. Luckily for this particular sloth, it was spotted near the El Pangan nature reserve by police who immediately alerted the ProAves’ reserve rangers, who came to its rescue. The rangers gave it a clean bill of health and it was released into the safe haven provided by the reserve.

This successful release back into the wild was recorded on camera by the ProAves’ rangers. The cameras had been kindly donated by Olympus, after they heard about WLT’s Keepers of the Wild initiative through Media Bounty, one of our corporate supporters.

The generous donation of cameras for rangers in WLT project sites is invaluable allowing them to not only record sightings and monitor the amazing animals and plants found in the reserves, but also record signs of any illegal hunting or deforestation in the surrounding area.

“The rangers sometimes find evidence of trespassers and illegal loggers”, said Nate Skinner, director of international development at ProAves. “For this reason, it is crucial that they perform routine boundary patrols on a daily basis to ensure the protection of the natural resources. Due to these increased patrols, we are now thankfully seeing a reduction in the illegal removal of trees”.

This is great news for the sloth and the forests threatened wildlife. The new cameras are enabling the rangers to record the signs of deforestation and illegal hunting and gives them evidence to inform the authorities while avoiding conflict with hunters. With cameras they can now tackle the threat to the forest and its wildlife – safely.

Helping rangers’ fight against the elements

The El Pangan reserve protects over 19,768 acres (8,000 hectares) of sub-tropical forest and home to many impressive and threatened species, including the Spectacled Bear, Jaguar and the Blue Pangan Poison Arrow Frog – entirely restricted to these forests. The reserve lies within one of the wettest tropical areas on Earth, seeing 26 feet (eight meters) of rainfall a year. This makes the rangers’ already physical work even harder.

“El Pangan has numerous trails allowing visitors and workers alike to access the reserve”, explained Nate. “The maintenance of them is crucial for the protection of the reserve, as well as for the visitor experience. Due to the nearly constant rain in September, there were many landslides and tree falls over the trails so a large part of the rangers’ time was taken up with trail maintenance and repair.”

Recently this work has become a lot easier thanks to a kind donation of new uniforms and waterproofs from WLT’s corporate supporter, Páramo an outdoor clothing manufacturer. Nate said:

“The rangers were extremely grateful for this excellent equipment and wish to express their gratitude for the generous donation”.

Much needed resources, like cameras and waterproof clothing, are invaluable to the rangers as they work in some of the most challenging environments on the planet. This equipment is helping them protect and monitor some of the most threatened species on Earth.

Buy an Acre in Colombia

Support the Keepers of the Wild appeal